We found 6 Reddit comments about Typography for Lawyers. Here are the top ones, ranked by their Reddit score. 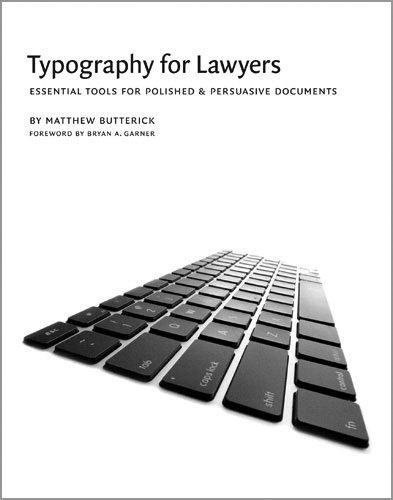 Bryan Garner's Redbook helps me to not sound like an idiot.

Matthew Butterick's Typography for Lawyers helps me to not look like one.

The Redbook sits on my desk, Typography for Lawyers is never far away.

Put differently: It may have been traditional, but it is now often an indicator of poor-quality paper. And I'm consequently embarassed for reddit for approving such an antiquated practice.

If you're looking for further reading on the matter, this is an excellent typographical guide. I keep it next to my Federal Rules.

Check out the book Typography for Lawyers by Matthew Butterick. There is a section in it about what you can do within the limits of pleading requirements that really help readability and presentation.

Hahahah, as a 2L I can say this is absolutely true and it was really frustrating to work under 2 partners that had two different viewpoints of the one or two spaces viewpoint.

Btw get this book: http://www.amazon.com/Typography-Lawyers-Matthew-Butterick/dp/1598390775

I'm pretty sure I've seen typefaces that include ligatures (or at least, have something in the ligature unicode slot) that don't actually need them.

While I agree that typesetting should be done in software designed for it, not everyone has that luxury. I've had to typeset documents in Word because others needed to be able to edit it, or update it, and they don't have time to learn inDesign, let alone want to purchase it. Also, for many of the folk he wrote this for (his examples come from Typography for Lawyers), they barely have time to get the Word version written, let alone do any typesetting whatsoever. For such folk, baseline improvements are enough to set them heads and shoulders above others.

Of course, for those who have the situation, time and/or funds to spend on getting proper typesetting, Word is obviously not a good choice as its limitations and flaws will become obvious. But I feel that spreading baseline knowledge of typesetting, even in the worst program will at least make our pigs cleaner, smell a bit better and seem more pleasant to be around, even if they are pigs :)