We found 14 Reddit comments about Victor Wooten: Groove Workshop. Here are the top ones, ranked by their Reddit score. 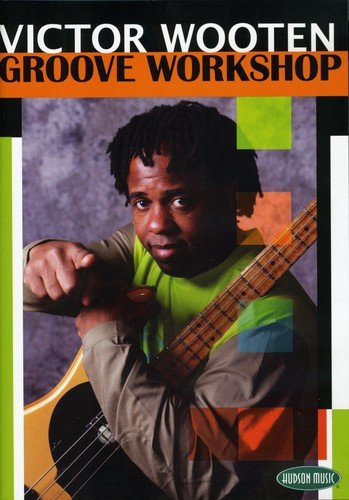 &gt;What is a good groove bpm?

Second, you would be doing yourself a huge favor by looking up Scott's Bass Lessons and watching his videos on groove, as well as Victor Wooten's Groove Workshop.

Third, you won't be able to create any type of groove if you don't have good timing or if you don't know how to play different note values.

I'd HIGHLY... HIGHLY... HIGHLY recommend watching Victor Wooten's groove workshop. It completely revolutionized my perspective as a bass guitarist and allowed me to more freely express my musicianship away from being self-conscious about notes. Plus you can listen to some epic Wooten snippets along the way.

You'll likely be convinced by the end of it that although notes are important to a degree, as a bassist keeping the GROOVE is Priority A. And groove isn't limited to 12 notes.

It's from this dvd.

Nope. I've looked for that clip on YouTube, but it's not there. I bought the DVD, because there's a lot of great lessons on it (and not just for bass players, for general musicianship, it's a must-have).

That is very much like Victor Wooten's approach to soloing and improv. I would recommend both his book and DVD

One thing that helped me get over that fear was this video right here:
http://www.amazon.com/Victor-Wooten-Groove-Workshop/dp/B001DPC4I2

You can surely download it. Victor's explanation how you're never more than one fret away from the "right" note really let me be more lenient with myself and keep playing through mistakes.

This vid from Victor Wooten might help, if you're willing to shell out some coin.

This music lesson is also recommended, no matter your playing level.

Playing bass without a drummer is kind of pointless. Bass is part of the rythym section after all. Try to practice and play with people as much as you can. You don't want to be one of those musicians who is great by themselves but can't play at all in a group.

Look up scales on the net or just figure them out yourself by playing along to music. It's not that hard, tbh. If it sounds off key, you're a half step off.

Chords: Honestly, learn to play guitar if you don't know already. They are the same. Bass typically only uses diads and traids anyway, or you can pick up a 8, 10, or 12 string if you want that sound. But, I came from guitar so I'm sure some will disagree with me.

This is an interesting question, and I think illustrates a certain bias in the thought process of music educators in the west more than anything. Far from being unquantifiable, rhythm and melody have been studied very deliberately in India, Africa, and the Middle-East, in the much the same manner as we study harmony so intensively. Indian music in particular, is very precise in its quantifying of tala (rhythmic cycles/time) and raga (melodic patterns and modes), with hundreds of specific varieties of each, and a complex system for deriving meaning from them. In some ways this is the major differentiator in musical thinking between east/west, harmonic thinking tends to demand so much attention that it steals the focus from other more immediate elements of musical form.

I'm not sure if this provides much of an answer to your question. In practical terms, you need to study harmony to understand what's been happening in western music over the past 300 years or so. Harmony is not the entirety of music or your training as a musician, just an important element of it that requires a lot of knowledge and practice.

This is an enlightening guide to developing other areas of your musicianship aside from harmony:
http://www.amazon.com/Victor-Wooten-Groove-Workshop/dp/B001DPC4I2

Check out this clip: https://www.youtube.com/watch?v=8Sw_trDFJw8

Hell yeah. There is a reason why a lot of metal guitarists also get into jazz (eg, Marty Friedman).

Here are my recommendations:

You'll need to learn how to read musical notation for this, but it's worth it.

It's a bass video and it's not even about technique, in particular. But it's filled with incredibly insightful advice for musicians of any kind. Highly recommended.

Several good suggestions already on resources. A few more that I find helpful:

So to a beginner bassist I would recommend two different study materials.

First buy this DVD, Groove Workshop. It's basically a lecture with exercises on the different components of music as it relates to the bass. One of the largest take-aways is that the notes you play are WAY less important than how you play them. They don't have the clip on youtube, but here is him doing something similar live. On the DVD it's just incredibly well done. He lists all the notes in a G major scale, then only plays the "wrong notes" (notes not in the scale) as Wellington lays down a chordal pattern in G. He then switches to playing in G major and the moment he does this, the G major sounds terrible. When he was playing out of key it was aesthetically pleasing, but when he switches to in key he changes how he's playing and it sounds more discordant.

Second, buy this book on building walking basslines. It's a great introduction to walking bass lines. The point here isn't to remember the notes, but rather the patterns and the feel of "walking".

But for more immediate tips do this. Play the root on the kick, the 5th on the snare, and embellish with the octave and 7th in time with the drummer's fills. You can move up to the 5th by hitting the 4th and down from the 7th with stops along the way at the 6th and the 3rd. If you really want to outline the chords play the root 3rd 5th, but be warned this sounds tired very fast.

The above is just my opinion and is provided merely as a quick outline to start getting the feel of moving around a chord.

Fretboard Logic. I'm surprised this hasnt been mentioned yet.

Its labeled as a master class for bassist, but it will blow your mind and make any musician their approach to music and their instruments.