We found 1 Reddit comments about Violence Workers: Police Torturers and Murderers Reconstruct Brazilian Atrocities. Here are the top ones, ranked by their Reddit score. 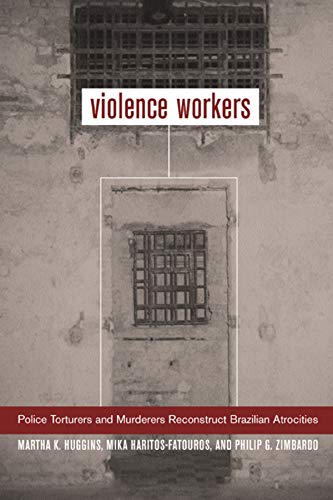 Pretty much not off the mark. Phil Zimbardo, who is the psychologist famous for the Stanford Prison Experiment, helped co-write a book called Violence Workers: Police Torturers and Murderers Reconstruct Brazilian Atrocities, and basically, yeah, they got wives and kids. Have barbeques and hang out with friends and drink. They keep their professional life and their personal lives very separate.

Granted this book mostly focuses on police torturers, death squad members, and generally people that are employed by the government, and that may have an influence because it's a little easier to justify what you're doing when you can tell yourself your a soldier or a policeman and on the right side of the law, and that what you're doing is getting drugs off your streets and reducing crime, as if the ends justify the means. Whereas these guys chopping off rivals heads with chainsaws mostly seem like criminals committing crime and a lot of these guys are probably complete maniacs.

But in Zimbardos research, at least when these guys are doing this for the police or as a death squad soldier working for a heavy-handed government, a lot of the total psychopaths (who you would think might me the ideal candidate for this fucked up line of work) are weeded out pretty quickly as being loose cannons, and not really reliable for extracting information they want. The ones that are good at torturing people and murdering people actually have fairly solid heads on their shoulders, look at what they're doing as righteous and for a bigger cause (to keep their streets safe, or to support a family by working for the government which has the population to provide for, etc.). And for the violence workers interviewed, they basically just leave all that rotten shit in the office on Friday afternoon and go home to mow the lawn and lay in the hammock, or whatever.