We found 14 Reddit comments about Wacom Intuos Intuos4 - Medium. Here are the top ones, ranked by their Reddit score. 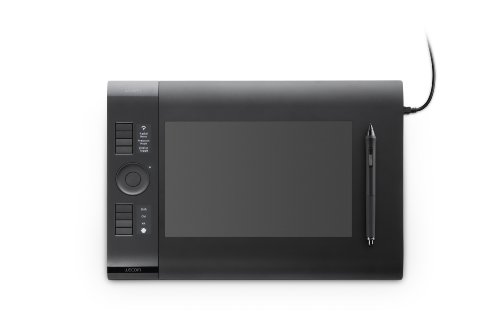 The problem with recommending a tablet is that I can only in good conscience recommend the stuff that isn't very affordable. Buying a tablet is like buying a car; buy cheap and you'll regret it later, because it'll either not be what you need or break down completely. If you're okay with spending around $200, this one is the model I've used for years now, and it's great: http://www.amazon.com/Wacom-Intuos4-Medium-Pen-Tablet/dp/B001TUYTZW/ref=sr_1_1?ie=UTF8&amp;amp;qid=1450471682&amp;amp;sr=8-1&amp;amp;keywords=wacom+intuos+4 Still going strong even after all the wear and tear.

Above all, make sure you're really ready to commit if you buy something in this price range. Well, unless you've got a lot of spending money, I guess.

Others have given advice, but I might as well chime in.

The Bamboo is a great little starter pad to play with. I wouldn't reccommend it as a real graphic design tool, but it really is a functional little pad that can get the job done and has some fun extra functionality with gestures and what not. The Bamboo is NOT specifically a graphics tablet though. It can function as one, but it is also touch sensitive and most graphics tablets are not reactive to anything but a pen or a conductive mouse created for the tablet surface. But it does have the same technology as an Intuos tablet, which is amazing tech, so it's very capable.

You can get a Wacom Graphire for around the same price as a bamboo, (I owned one of these for a couple year) and it is made for this kind of thing. It is a decent little tablet, and would be alright for a hobbyist or a beginner, but i'd skip it. But it isn't as advanced as the next type of tablet...

which is an Intuos3 and Intuos4. Here is where I would start. I would actually skip the intuos3 simply because the intuos4 is basically an industry standard now. It's tech is updated often and it is simply a fantastic tablet. The intuos 4 is what most people end up with. There are small, medium, and large versions. The size you get is a personal preferance. It also comes down to desk real estate. Not a lot of desks have a huge chuck of space for a large intuos. The medium is a great compromise of space vs. functionality. And actually, a lot of people prefer the slightly smaller ones to reduce having to move your arm/hand around as much reducing fatigue. Also the price is obviously better for a medium sized one than a large one. There is also the wireless version, which is awesome since you can simply stow it away somewhere quick and easy. I would recommend a carrying case for it though to keep it safe. Even just a small laptop bag would be fine. But it's an investment you will want to keep safe.

Finally you have the amazing Cintiq line. The Cintiq 12WX and Cintiq 21UX and I just learned about the silly Cintiq 24HD.

I have a Cintiq 21UX and it has changed the way I work. It has sped up my workflow and made things so much easier and faster and accurate and simply amazing. (Note I didn't quite pay what they are asking for on Amazon but that's the same model). the cintiq's are expensive as hell, but it's an amazing investment if you are really going to take advantage of it.

Note however, that you can do everything on an intuos4 that you can do on a cintiq. The thing with the lesser tablets under the cintiq is you will have a real learning curve dealing with drawing on your desk/lap while looking at the screen. It's weird and takes time to get used to it. But there is AMAZING art done on them. As I said, they are industry standard and amazing pieces of tech.

Hope this helps a little. There are alternatives to Wacom, and some can get the job done, but I won't recommend them as in the end, you want a Wacom.

IMO, don't even consider anything other than a Wacom. For your price point, get a Bamboo and if you feel you need something bigger/better, sell it and upgrade to an Intuos. I have had an Intuos 3 for several years and love it. The new version is very slick but I don't really have a need to upgrade.

In regards to your specific points:

People have said that the Bamboo is a good tablet and priced well at $59.99.

I personally use the Intuos 4 and I love it. I find the size of the tablet to be fine to work with and the size allows me to throw it in my bag along with my laptop.

You can get it brand new for $309 on Amazon.com and I don't have to worry about who used it previously.

I'm not getting any presents this year, but if you want to give something. Then i'd like something like this. But thats just selfish thinking of me expecting that 1. You'd wanna pay so much. and 2. That you're going to choose me over that Clean water well idea. But if you don't want to buy me a wacom, i'd also be happy with just a good book or something. I heard House of leaves is good.

Even if you dont pick me or something, I just want to say you are a great guy and props to you for this kind of christmas spirit. This song is for you.

I have one of those fancy drawing, digital pen tablet things. This one specifically.

So heres the thing. The pen acts like a mouse in all respects to blender with the exception of pressure sensitivity and absolute positioning, as I'm sure you already know.

I am an avid pen tablet user, I've dabbled with blender, and I've been especially a linux user. Now that you know that, let me tell you my thoughts.

Pen input is okay with blender. You can use it as you expect, it takes some figuring out how to get it to work. (Or it did when I was trying to use it.) Getting into sculpting mode, and working with an object was not easy, nor did I find it particularly intuitive to do anything. In short, I gave up... So take my opinion with a grain of salt.

But I will note, that I found something else that works great in tandem with a pen tablet, a 3D Mouse. Personally I got the 3DConnexion Space Navigator http://www.3dconnexion.com/products/spacenavigator.html as something to play with. (You can find them on ebay for half of the retail price.) So throw away your USB Mouse, plug in the tablet, and get a 3D Mouse for moving your 3D objects.

Sadly, the wacom you chose doesn't have a mouse option. That makes me disappointed. I would've recommended looking for a Intuos4 http://www.amazon.com/Wacom-Intuos4-Medium-Pen-Tablet/dp/B001TUYTZW/ref=sr_1_1?s=electronics&amp;amp;ie=UTF8&amp;amp;qid=1413163434&amp;amp;sr=1-1&amp;amp;keywords=intuos4

Either way, wacom works great on linux, it's normally built into the kernel so no additional software needed.

The biggest issue that may arise is what to do with the keyboard. For blender it is the most used tool, right next to the mouse. (Duh)... but it's an important part of blender. There is no answer to how to make space, find something comfortable for you, maybe invest in a good keyboard tray. Take into consideration your handedness when placing the tablet.

Just remember, the tablet for all intents and purposes replaces your mouse. Don't think it's a two handed use em both at the same time thing, which is why I recommended the 3D mouse. The biggest issue is switching from the pen to the keyboard, depending on your handedness.

This link is a pretty good run down on tablets, however the Bamboo is now the Intuos and the Intuos series is Intuos Pro.

tl;dr: If you're doing this as a hobby, think of getting a Bamboo/Intuos or if you're willing to splash money an Intuos 4/5/Intuos Pro.

You can get good deals on second-hand/refurbished Wacom tablets on eBay once you have a look around. I personally wouldn't get anything smaller than a Wacom medium-sized tablet simply because you don't have room to do nice, long strokes.

There are other brands such as Genius and Huion if you're looking to save a bit of money.

I bought a Wacom Intuos4 (Medium) last week. There is a learning curve since you have to program the various buttons and transition to the tablet from your mouse and keyboard. However, once you have get a grasp of the basics, retouching work is a bit quicker.

Compare prices online and in stores. I'm not sure why, but Best Buy had this tablet on sale for $300 when I bought mine. The sale appears to be over.

Drawing tablets really aren't something to skimp on. You're going to get a postage stamp with 10 second delays which will make digital art a giant chore if you try and get the cheapest thing you can.

If you're just trying to practice art then spend $100 getting a kit of prismacolor colored pencils, quality drawing pencils, erasers, and sketchbook. You'll get all the same practice.

If you're doing this to make money and take commissions, you're going to want to just wait a while and save your money and drop $230 or so on a used Wacom Intuos.

It's funny that you say that, because I have one of these, although I haven't used it for Rust yet.

The addition of a tablet blows Photoshop wide open. Seriously, it opened up a whole new world of capabilities and things i could do that were never an option before. /u/vandebar is right in saying it won't make your drawing technique any better (in fact, I find the stylus/tablet interface a bit less forgiving than pencil and paper), but it will allow you to do things in PS that that were nearly or totally impossible with a mouse. I have an Intuos 4 (current generation is the Intuos Pro ); it's served me well for 3 years.

Bit late on the reply here,

To answer the original question, there isn't actually a need for me to run Microsoft Surface Tablets (I looked up their cost, goes around $600 to $1000 as well) for Pro3

One desktop, 2 monitors, and a more effective mouse, with macro and fine tuning controls. You would be suprised what you can accomplish with a great gaming mouse (I just bought a logitech g502 for like $60). You can bind a specialized key that can change your DPI settings temporarily to get incredibly high tuned pen strokes on your mouse. There's also the option to change weights giving an even more closer pensmanship with a mouse. Plus I can modify massive numbers of macros (with this mouse, if I use all 3 profiles, I think I can map about 20 key combinations and G-shift [its like holding ALT to get more commands], although I wouldn't need that many)
I normally use the macros for ALT+1, ALT+2, ALT+3, ALT+4 for my quickaccess toolbar commands

for reference
While I haven't done this yet, in theory it works. The wacom tablet is more or less a mouse in the form of a pen with comfortable tablet that just acts as a mouse pad. The wacom tablet enables you to have high precision pen strokes in a specific area if you want handwritten notes. The normal mouse you use just helps you navigate around onenote.

^I currently use option 4. Option 4 and 5 are all better than option 1,2,3 since it just runs on one desktop so there's no syncing errors. Option 4 satisfies all my needs. Plus surface pro runs a full copy of onenote and I only get 2 liscenses on my subscription (I have a home computer and work computer, so having a tablet - aka a 3rd liscense, would not work).