We found 2 Reddit comments about Warmachine Two Player Battle Box. Here are the top ones, ranked by their Reddit score. 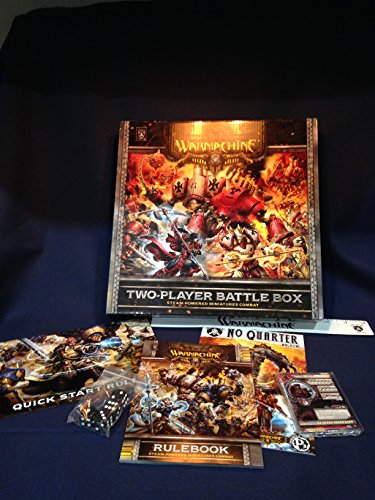 Miniatures are supplied unpainted. Assembly is requiredGreat starting place for anyone with the desire to try WarmachineEasy to read rules and a free copy of no quarter magazine!
Check price on Amazon

Very much so. I've hardly gotten into it, and it is a blast. I would highly suggest trying to find someone in your area who is already into it. Having someone to teach the basics is very helpful.

Getting started isn't too hard. Getting your hands on a battle box(Cygnar for example, there are many other factions) is a great way to start up. They do require assembly(And glue) and painting. The models in the battle box are made of plastic, the other models for purchase are made of pewter, so they will be of lower quality, but still play the same. While not full battlegroups, they are balanced to against each other right out of the box.

The Two-Player Battle Box has two different factions to fight with. Each faction is slightly larger than the battlebox groups, and are sized of Skirmish tier(Lowest point tier).

That's the scale. It can get confusing. Generally, the scale in millimeters is the distance from the ground to the eye of a grown human male.

Most popular games are in 28mm, so a human male trooper mini is about 32mm tall from foot to head. Another popular scale is 15mm. Then Dropzone Command had to be different and are at 10mm scale.

The smaller the scale, the smaller the minis. That also means they are cheaper, faster to paint (less detail) and you can fit more on the table at once. A smaller mini may be less sastisfying to play with for some people, because it's harder to see all the little bits and facial expresions, etc.

As far as getting started, many games have a two player starter box. They usually come with the rule book, and 2 small forces - enough to play a game, anyway.