We found 6 Reddit comments about Warrant and Proper Function. Here are the top ones, ranked by their Reddit score. 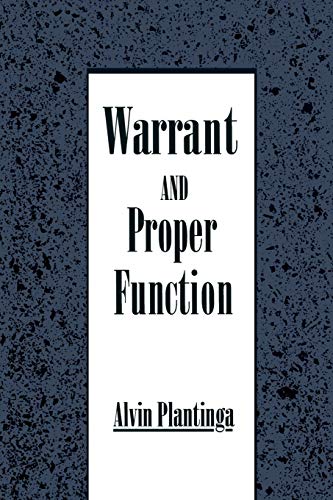 That there is no reason to suppose we are being irrational by believing it without trying to ground it in some other belief; we are rationally entitled to take it as the foundation of our reasoning and arguments. Alvin Plantinga is known for arguing that theism is such a belief, but I think he's exaggerating when he says his epistemology means that it's rational to believe in God "without any evidence or argument at all", since a properly basic belief is still rooted in experience on his view. For a fuller picture, see Plantinga's Warrant and Proper Function, among his many other works on the subject.

If you want to go for a scholastic/western positive apologetics approach check out: The Blackwell Companion to Natural Theology.

If you want to go for a scholastic/western negative apologetics approach check out Alvin Plantinga's God and Other Minds. This is the work that actually re-kindled serious philosophical debate on the existence of God in Anglophone philosophical circles according to Quinten Smith (a notable atheist philosopher btw). From there you could also check out Alvin Plantinga's warrant trilogy in order: Warrant: The Current Debate, Warrant and Proper Function, and Warranted Christian Belief.

The Orthodox approach has always been mystical rather than scholastic all the way from the beginnings of Christianity. From Jesus, to the apostles, to the church fathers, to right now we still have the original apostolic faith in the Orthodox Church. Check out this short documentary to learn more: Holy Orthodoxy: The Ancient Church of Acts in the 21st Century.

Fr. Vladimir Berzonsky explains the Eastern/Mystical approach: "To properly understand the Orthodox approach to the Fathers, one must first of all understand the mystical characteristic of Orthodox theology and the tradition of the apophatic approach to an understanding-if "understanding" is indeed the proper word-of what the hidden God in Trinity reveals to us. This needs to be combined with the insight that what is incomprehensible to our reason inspires us to rise above every attempt at philosophical limitation and to reach for an experience beyond the limits of the intellect. The experience of God is a transcendence born from union with the divine-henosis (oneness with God) being the ultimate goal of existence. This makes the requirement of true knowledge (gnosis) the abandoning of all hope of the conventional subject-object approach to discovery. It requires setting aside the dead ends of Scholasticism, nominalism, and the limits set by such Kantian paradigms as noumena/phenomena. One must return to, or better yet, find in one's heart (or nous, the soul's eye) union with the Holy Trinity, which has never been lost in the Orthodox Church."

One way of sidestepping the Gettier Problem, particularly in light of examples like this one, popularized by Alvin Goldman, is to say that justification should not be thought of as wholly internal to an agents beliefs. That is, things outside of an agent’s belief such as whether the belief was caused in the right way, or whether the belief was formed by a reliable belief-forming process, contribute to whether or not the belief is “justified.” This view is called justificatory externalism and I think it’s at least partly right. If we accept some aspects of externalism, the Gettier problem becomes much less problematic.

One externalist view of justification, more nuanced in my opinion than Goldman's, is Alvin Plantinga's "proper-functionalism" as laid out in his book Warrant and Proper Function. On Plantinga's model, if our cognitive faculties (the ones specifically designed for producing true beliefs) are functioning properly in the way they were designed (either by God, as Plantinga would want to have it, but more likely, by evolution, or even "socially designed"), in the environment for which they are designed, and a true belief is formed, it is knowledge. So, in the robot dog case, since this isn't the sort of environment for which my faculties were designed (we didn't evolve in a world populated with both dogs and robot dogs) and it impairs my descriminative ability, it wouldn't be knowledge, even though it is true belief.

"Warrant" is substituted with "Justification" here, but it functions in much the same way as a JBT account.

Plantinga is an old-school academic philosopher, so the best way to get familiar with his ideas is his published works (Amazon links below):

I would add the other two books in Plantinga's trilogy on Warrant as well.


Also Whose Justice? Which Rationality? by Alasdair MacIntyre

I've heard that Charles Taylor is a must as well.