We found 12 Reddit comments about Washington: A Life. Here are the top ones, ranked by their Reddit score. 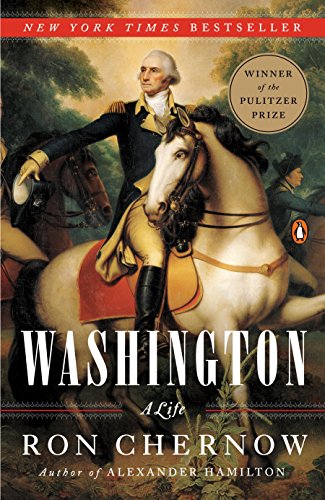 A History of the American People

or if you are a dirty commie

Honestly they are a yin and yang that do an amazing job of giving you US history in broad strokes.

Other than those Chernow on Washington or just this.

This isn't my specialty, but I have come across it a few times in other reading.

The 22nd Amendment was first proposed in 1947, by a Republican-majority Congress (both House and Senate). The Republican's were able to sway anti-New Deal Dixiecrats (Southern Democrats) to their side and got the proposed amendment through the House with less than 2 hours of debate. Interestingly, one of the few Northern Democrats to vote with the majority was John F. Kennedy, who was in his first term as a representative and whose father had fallen out with FDR. The Senate debated the amendment for 5 days, but ultimately passed it.

According to historian David Kyvig, 18 state legislatures rushed to ratify the amendment, with virtually no public participation in the debate.^1

By 1951, the required three-fourths of the state legislatures had ratified it.

According to historian James MacGregor Burns (who admittedly is known for being a little left leaning):
&gt; At the time, an amendment limiting presidents to two terms in office seemed an effective way to invalidate Roosevelt's legacy, to discredit this most progressive of presidents.

Thinking more on this, I'm not exactly sure I agree with Burns. I think the inspiration for Congress to initiate the amendment could have come from an attempt to discredit FDR, but Congress does not pass amendments by themselves, they require a super-majority of states to ratify them. Considering that Truman (who was the Democratic incumbent and had been FDR's VP during his 4th term) had just been reelected, it seems unlikely that 3/4 of the states would vote to snub FDR.

Instead, it probably had more to do with converting an unwritten rule into a written one.

The rule started with George Washington, who could have been King of America, but chose instead to follow the example of Cincinnatus and serve for only as long as he felt his country needed him (which ended up being 2 terms).^2

The only person who had tried to defy that tradition and seek a third term prior to FDR was Ulysses S. Grant; however, he was denied his party's nomination.^3 Teddy Roosevelt also technically sought a third term, but he only ran for office twice, since his first term came after McKinley was assassinated.

Even FDR hesitated (or at least tried to make it seem like he did) before running for a third term, sending a letter to the 1940 Democratic convention, that he would only run if he were drafted, and encouraging the delegates to vote for whomever they pleased. James Burns argues that this was just a tactic FDR used, as at the convention as immediately following the announcement of FDR's message, the loudspeaker screamed "We want Roosevelt... The world wants Roosevelt!"^4

The Republicans campaigned against a 3rd and 4th term in 1940 and 1944, respectively; however, FDR was too much of a political juggernaut to be stopped in the elections. Ultimately he was only deposed (like a king) by his own death.

Therefore, the Congress, which has historically always been weary of the president, acted to ensure that nobody else would get the chance to serve more than two terms. This would also help explain why some Democrats voted for the amendment, seeing as the shoe could just have easily been on the other foot with a Republican president.

Hamilton was a controversial figure to say the least. During his time in Washington's cabinet, he was fundamental to the creation of the policies of the Federalist party. He was frequently reviled by the Democratic-Republican press, accused of being a secret monarchist, enriching himself at the expense of the government, and poisoning the mind of the otherwise perfect George Washington. He also did not have positive relationships with either Jefferson or Adams. While Jefferson thought his policies were dangerous Adams disliked him for much more personal reasons. During the elections of 1792 and 1796, Hamilton secretly lobbied against Adams, ostensibly so that Washington would be elected unanimously. Not surprisingly, Adams took that personally, and never forgave him.

One of the frequent criticisms that was lobbied against Hamilton was that he was too ambitious. During the quasi-war with France (1798-1800), Adams placed Washington in charge of the army in case of a French invasion. Due to Washington's age, he appointed Hamilton to be his deputy, meaning that he was essentially in control of the army. When it became clear that France was not going to invade, and the army would not be needed. Hamilton began to suggest various other military targets that he could attack (Florida or Spanish Louisiana). Southern Democratic-Republicans also spread rumors that Hamilton planned to march on them, placing himself at the head of a coup.

While he may have been interested, Hamilton never really had an opportunity to run for president. Of the 4 elections he lived through (he died in 1804), two were unanimously won by Washington, and John Adams was the Federalist candidate in the other two.

As to whether or not he could have won - probably not. He was despised by the Democratic-Republicans and distrusted by some members of his own party. Additionally, after Jefferson's election in 1800, the Democratic-Republican party controlled the presidency for the next 30 years. So even if he had not died in 1804, he may never have had a good opportunity.

Finally, another strike against Hamilton was his involvement in the 'first American sex scandal.' Democratic-Republican newspaper editor James Thomson Callender published that Hamilton had been making secret payments to James Reynolds. After Reynolds was jailed for a financial scheme, Callender insinuated that Hamilton was involved. Hamilton responded by stating that he wasn't involved in any such scheme, he'd just been sleeping with Reynolds' wife. (He even issued a pamphlet saying such.) This scandal, combined with the general dislike for him throughout the country would almost certainly have kept him from ever being elected President.

No problem. If you want to learn more about George Washington I highly recommend this book. http://www.amazon.com/Washington-Life-Ron-Chernow/dp/0143119966/ref=sr_1_1?ie=UTF8&amp;amp;qid=1459134165&amp;amp;sr=8-1&amp;amp;keywords=washington
Really love this book and it goes into great detail on Washington's life without feeling boring or overbearing.

I'm reading Washington: A Life, by Ron Chernow. Just trying to imagine what it was like to live during a time when extraordinary men were leaders.

50 shades is too softcore for me.

Some dude posts all the recommendations he's made on his podcast. I assume the Washington book you're referencing is Washington: A Life by Ron Chernow

Or maybe In the Hurricanes Eye by Nathaniel Philbrick

Back then? Most of them. George Washington was the master, and John Adams tried but failed most of time and was made fun of for it by his peers.


edit: I highly recommend Washington: A Life for anyone interested in his man and those around him. Be wary, it strays into conjecture at times and I think it comes off as a little too harsh on him in some instances, but its still the best stand alone biography I've read.

&gt;I don't know how you can say that Washington had unusual virtue when he had slaves for most of his life.

"It's had to get a man to understand something when his salary depends on him not understanding it."

It's easy to be against slavery today, your life doesn't depend on slavery. But if you had been born in a slave owning society, spent your whole life listening to people who extolled the positive virtues of slavery, and financially depended on the slaves you own, you probably wouldn't be against slavery. Neither would I, or most people. Washington, however, DID live in such a society, came to hate slavery anyway, and personally sacrificed to end slavery in his small corner of the universe. That is exceptional virtue.

&gt;Also as the first president he had power to try and do something about it and didn't.

What power was that? the constitution gave the federal government no power to eliminate slavery. It specifically banned it from doing so, in fact.

&gt; He was a very wealthy man, especially after he got married, he could have easily afforded to free his slaves earlier.

His wife's wealth was not his to spend. See Chernow's biography on this. Washington held Martha's property in trust for her children, he literally wasn't allowed to divest himself of those slaves.

This book has the Washington speculation: http://www.amazon.com/Washington-A-Life-Ron-Chernow/dp/0143119966

The author asked several PD specialists to review the evidence--there was no strong agreement that it was conclusive.

Ron Chernow wrote a really in depth one a few years ago. It's not as dry as his Alexander Hamilton biography (I don't know how anyone could make that man's life and accomplishments seem boring), but it's still a pretty daunting read.

If you're really dead set on reading about ONLY Washington, that's one of the best, most comprehensive biographies I've seen, though to be honest, it's the only one I've actually completed since whatever outdated and bland biographies on Washington I had to consult in high school for papers.

If, however, you're interested in other figures contemporary to Washington, and arguably as important (if not more so) in the formative years of the US, check out Founding Brothers. It's a relatively quick read, and offers just enough information and analysis of a cast of characters to remain more solidly biographical than merely a hodgepodge of anecdotes.

OR. If neither of those appeals, Bentley Little wrote a short story called "The Washingtonians" in a short story collection that appears to be currently out of print. In it, he explores the "secret" life of George Washington, the "real" reason he wore false teeth, and exposes a secret society of followers in the present day.

Ron Chernow's Washington is supposed to be good - but it's a brick at over 900 pages.