We found 13 Reddit comments about Why Civil Resistance Works: The Strategic Logic of Nonviolent Conflict (Columbia Studies in Terrorism and Irregular Warfare). Here are the top ones, ranked by their Reddit score. 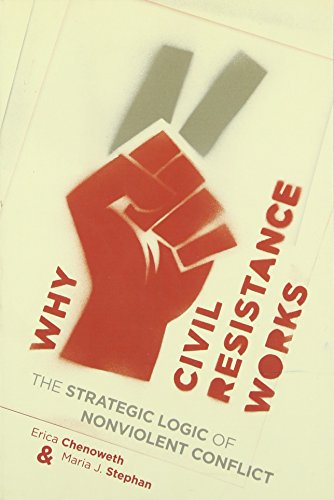 13 Reddit comments about Why Civil Resistance Works: The Strategic Logic of Nonviolent Conflict (Columbia Studies in Terrorism and Irregular Warfare):

Collected data on protests between 1900 -2006. Showed that non-violent protests are about twice as likely to work than violent protests. This is the book that extinction rebellion frequently talk about.

&gt;Princeton University’s Omar Wasow studied protest movements in the 1960s and found that violent upheaval tended to make white voters more conservative, whereas nonviolent protests were associated with increased liberalism among white voters. “These patterns suggest violent protest activity is correlated with a taste for ‘social control’ among the predominantly white mass public,” wrote Wasow in his study.
&gt;
&gt; Stephan and Erica Chenoweth produced a book, Why Civil Resistance Works, which found nonviolent resistance movements were twice as likely as violent movements to achieve their aims in the 20th and early 21stcenturies.

Important message here. It shows that violence is counter-productive.

You'd be hard pressed to find an Ethicist who agrees with you. You know - someone who's philosophy major was in ethics?

Here's a good book to read - maybe you should consider taking an ethics course.

Do you think the netherlands is at risk of falling into tyranny in the near future? Do you think they are a particularly authoritarian culture? This is very internally coherent rhetoric but I wonder how effectively it maps onto our actual world.

So with regard to the notion of the armed citizen struggling to topple the oppressor I'm not convinced that is actually a better alternative to nonviolent actions. This opinion is specifically informed by Erica Chenoweth's highly compelling work, can't recommend the book enough. It's not clear that violent struggle is ever actually more effective even in autocracies, and especially in places with consolidated democratic norms.

Now as for policing, the country that has the best police force near as I can tell is the UK. Part of that is cultural, their institutions were founded with notions of just policing at heart. Further, they're mostly monoethnic communities and those tend to have better policing outcomes as there isn't an ethnic hierarchy to reinforce.

Keeping these in mind, I think it is worth mentioning that the degree to which their citizens are armed does appear to play a role. We ask cops to do tons of stuff that's not just investigate specific crimes, they're also sorta societal magistrates. If your neighbors are having a really ugly public fight that looks like it may turn violent but is now just a screaming match, you call the cops and have them sort it out. These sorts of ambiguous situations have the potential to turn lethal at any time in the US, and this makes being a cop really dangerous. Accordingly, they feel the need to be in dominant control of any ambiguous situation, and a firearm is a really fast way to assert that control. In the narrow scope of our society, it seems that cops would become less resistant to actually rooting out and expelling the aspects of their culture that leads to such crazy rates of violence if our public was less frequently and lethally armed.

That's not to say I don't find any use in the marxist lens, far from it, but I do find sometimes it's a bet existentialist. I find the notion that the only reason I could oppose our civilians owning guns as much as we do is some latent fascism kind of insulting. Guns are not the only mechanism by which society changes, indeed I'd argue they've been much less effective than our institutions at leveling social change in the last century. Part of the benefit of living in a consolidated democracy is that there are avenues for change that are accessible independent of violence

This is a tangential point and doesn't really answer your question, but just want to chime in to say that the research seems to show that nonviolent resistance is about twice as effective than violent resistance in bringing down authoritarian regimes (Chenoweth has done the most famous research on this). I'm not familiar enough with the research to to know all of the qualifiers and caveats to this generalization, but it seems to be a pretty big difference in effectiveness.

So, land of the free really doesn't look so free these days. I've worked alongside more professional police in the Congo and Lebanon, but America, your country seems to get more terrifying for the law abiding citizen everyday.

What percentage of your population do you expect to be abused, assaulted and violated by unprofessional, trigger-happy, power-hungry-tripping "policemen" (and yes, I use quotations, because they are really thugs with guns who persistently fail to follow your country's legal framework and clearly show no regard for violating your ever preached about Constitution, which supposedly makes the USA the "greatest country" on Earth) before mass citizens will march on Congress?

I ask this as someone who genuinely cares for the common man, woman, and child. But, I cannot understand how you can have such a strong Occupy movement against the banks, yet when it comes to your civil liberties and personal rights, there appears to be no form of mass response other than rioting (which isn't the answer either).

There's a REALLY great book on civil resistance which I and many of my fellow journalist friends would strongly recommend you read, and consider applying. Check it out from your library and I promise, you'll feel drastically more informed over how effectively individual communities, towns and cities can stand up to abusive authorities and successfully alter the outcome in their favour.

I hope at least some of you pick this book up, and pass it along to your concerned friends.

A good place to start might be Why Civil Resistance Works. The writers touch on a number of points, but the most relevant to your question is this: looking at a number of movements that aim to effect social change, they find that non-violent movements often achieve greater results. They theorize that by eschewing violence, they open the doors to greater participation and attract a wider variety of 'recruits' than a similarly-minded but violent group might.

Erica Chenoweth proves this point within her book Why Civil Resistance Works which uses a quantitative model (p&lt;.05, n&gt;140) to state that,

&gt;"nonviolent campaigns facilitate the active participation of many more people than violent campaigns, thereby broadening the base of resistance and raising the costs to opponents of maintaining the status quo."

As for your, "get done without necessary violence," Chenoweth finds that violence actually hurts the users' causes. Most violent actions causes backfiring from their opposition.

You should read her book or at least listen to one of her Online Discussions.

[And there just so happens to be a well research book on this very topic.] (http://www.amazon.com/Why-Civil-Resistance-Works-Nonviolent/dp/0231156839)

Sure, an insurgency movement can be pretty effective at thwarting the attempts of an invading army. However, they don't have a great track record, when compared with mass non-violent movements, for bringing about any sort of society that most of us want to live in.

Edit: To clarify my point, I don't think it is a very accurate to compare insurgency movements to the reason that many people in the US cite for the reason to have their firearms; the ability to stop the government from becoming more authoritarian. There is a lot of academic literature on insurgencies, social movements and revolutions. Having read a lot of the literature on social movements and revolutions, I can't remember a single peer reviewed article or book that can show that access to firearms is a particularly important variable in the success of a revolution or social movement. If someone can point me to that literature, I would be happy to read it.

Well everything is a shade of grey. But generally the more violent, the less successful. I'm getting my info from this book FYI. Good read overall.

There have been pretty effective nonviolent movements though. The Velvet Revolution was pretty fricken nonviolent.

@KubrickIsMyCopilot, Your argument is bad and you should feel bad. It's clear that you haven't read "Why Civil Resistance Works," which is the book that this article is based on, or you wouldn't be making this argument. The authors looked at data from the last 100 years of both violent and nonviolent conflict, which is what led them to the conclusion that nonviolent civil resistance is 2-3x more effective than violent resistance. They provide case studies of both violent and nonviolent revolutions that illustrate their hypothesis for why this is the case. Put simply, violence is barrier to entry for most people. Violence as a political tactic appeals primarily to a very small slice of the population, mainly men ages 16-45 years old who are willing to physically harm other people (this is actually a very small proportion of the overall population). Nonviolent resistance is able to incorporate people from all demographics of the population, including men who aren't willing to hurt others, most women, civil servants, artists, intellectuals, academics, clergy, etc. (i.e. the people who typically make up a movement). Here's where this gets really important: every revolution that engaged 3.5% of the population on a sustained basis was victorious, though many were succesful at a lower rate of participation. But that means if you get to 3.5%, then you win, according to the data. Here's the kicker: no violent revolution made it to 3.5%. You see, violence narrows the range of people your revolution can appeal to, so if you can only target males b/w 16-45 who're willing to hurt people for political purposes, let's be generous and say that's 10% of the population. That means you have to get 1/3 of them to participate in order to win (i.e. 3.5% out of 10%). However, if your movement instills nonviolent discipline in its leaders, then you can target up to 100% of the population (demographically), meaning you only need to recruit 1/30 to guarantee victory (3.5% out of 100%). Nonviolence is 2-3x more effective than violence when it comes to victory, but as a recruitment tactic, it's 10 times more effective.

Here's the author's TED Talk which lays all this out: https://www.youtube.com/watch?v=YJSehRlU34w

Here's a link to the book "Why Civil Resistance Works": https://www.amazon.ca/Why-Civil-Resistance-Works-Nonviolent/dp/0231156839

P.S. The historical reference to the Nazis is also fallacious. For example, look up the history of the White Roses (or watch the movie Sophie Scholl: The Final Days). The German population became more susceptible to electoral campaigns focused on "law and order" due to the street brawls breaking out between Nazis and communists. Violent resistance was a precipitating factor in Hitler's rise to power.