We found 25 Reddit comments about Worthless: The Young Person's Indispensable Guide to Choosing the Right Major. Here are the top ones, ranked by their Reddit score. 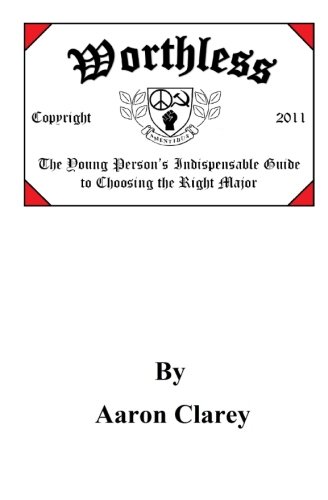 The title is badly misleading - Aaron Clarey (aka Captain Capitalism) is as a "CEO" as Jessica Yaniv is a cis woman.

He's a controversial and opinionated author, has been blogging since 2004 and currently earns as much as $131 monthly doing so.

Much of his content is just "reeeeeeee leftists!" but maybe his book "Worthless" be of some value to young people interested in college. (TL;DR Major in STEM everything else is worthless liberal bullshit - for more balanced perspective one may listen to Lindsay Shepherd on her experience)

Read Worthless by Aaron Clary. Instead of getting in debt for grad school, why don't you find a husband and have your family? Grad school will always be there after the kids are older. Each year you put off having kids will decrease the likelihood of it.

I recommend that you read this and also begin to read his blog. A college education is nothing like it used to be. Many, many young people are graduating with huge amounts of debt and no job prospects to pay it off. If they can get a job it is in a wholly unrelated field and it all goes to pay off debt in a degree they cannot use. Do some serious research on any degree you are considering. What kind of debt will you have to go into? What are the job prospects like upon graduation? What do you have to give up to obtain this?

People will tell you that an education is the be all end all. They will equate this education with college only. That is absolutely not the case. Some of the least educated people in the world have many college degrees while some of the most educated never set foot on campus. Don't let people fool you into thinking that college=education. You can learn far more about anything you choose if you have the drive to learn it on your own. You will not have that piece of paper, but today, there is a good chance it won't do anything for you anyway. You young and if you want a family, now is the time to focus on it. Once you're too old, you're simply too old. One can get educated any time in life.

The whole entrepeneur from armchair-sitting and pondering ideas million dollar business from nothing fantasy is bullshit. Ideas and creativity dont pop out of thin air (usually), they come from experience. Most people that start businesses have a skill they've practiced in the field or even as a hobby for years. Unfortunately, the past generation has been sitting idle in the daycare-prison for 12years and comes out with no skills whatsoever. No apprenticeships, no internships, no self-teaching or family social circle to mentor them.

Im gonna guess you're in highschool. This means you know nothing about the real world, have no capital, and have no skill set. Get the skills first, then worry about a business. Do you need a university degree to do this? Absolutely not. Can university help you? Absolutely, but you gotta know how to navigate it academically and financially.

First off. Congratulations on some things.

&gt; Before GDP, I was a normal college freshman.

Setup for a tall tale. Liars and high school kids writing creative fiction often begin their stories with unnecessary setups such as "It was a normal day at the office", or "It was a day like any other", when of course it wasn't. I'm putting my money on her never having been "a normal college freshman", whatever that means. She desperately wants us to think she is an innocent victim of circumstance. Knowing that she's lying makes the rest of her garbage that much easier to sift through.

When a story begins with Once Upon a Time you automatically know it's fiction.

(1) Use of the passive voice indicates lack of agency, but we all knew that. (2) She knew she was being lied to and wants us to think she didn't know. Notice she does not say "They lied to me" - and I'm not going to say it for her.

&gt; They don’t have to convince you to shoot an adult film, they just have to convince you to fly to California and they’ve already won. They email you plane tickets and hotel reservations worth over a $1000, and then they get you excited to be in California (I’d never been) and to be on the beach, and go shopping, and you don’t even stop to think that maybe this isn’t just a modeling gig after all. And once you get there, you’re done. He’ll convince you that no one will ever see it, it’s for Australia/foreign markets only, it’s only released on DVDs, etc.

You ... you ... you ... no I/me. Whatever she is talking about, it didn't happen to her. Remember Charlie Rogers, the lesbian who faked her own hate crime? She didn't talk about herself, she talked about you, you, you. "Being a victim in a situation like this or a survivor ah and then having your ah, integrity questioned".

Wait wait - I thought she was a normal college freshman.

&gt; I remember getting ready to go to a concert one night. I got out of the shower and ...

Sexually abused people and sexual abusers often include unnecessary washings in their stories. Reading between the lines here it sounds like she whored herself out - probably in a desperate ploy for attention - and now regrets it after the fact.

There she goes again telling us what she "would have never" done.

&gt; I was in a small program, and reputation was everything. The stress of knowing people know, wondering who doesn’t know, and hiding piled up and eventually everything fell apart.

Social shaming is the most powerful weapon against women. Women will put men in jail for life only to deflect being called a slut.

&gt; I was blackmailed into staying in an abusive relationship because my ex threatened to send the link to my family and siblings if I ever left him. And when I finally did find the strength to leave, he actually did it. He would wake my mom up at 3, 4, 5 AM with screenshots. He sent them to my 17 year old step brother.

Notice her messed up family situation. A mom, a step brother, and no mention of a father or step-father. Again in the words of Captain Capitalism (no, I'm not his shill), "The father was not available for comment".

&gt; I’ve gone on several dates just to be left when I told them the truth.

The manosphere is replete with advice about women who are up front on the first date about their sexual histories. Of course in her case it's obviously not her fault that men run away for no good reason at all just because she is truthful - truthful I say!

&gt; I get spooked easily because I’m so terrified of men now.

Oh wait - strike that last comment. She is so afraid of men that she repeatedly goes on dates with them. (Is your brain hurting?)

&gt; Some people have told me I’m one of the strongest people they know.

Women who abuse or even kill their own children often say things like, "I'm a good mother".

I'm glad the comments include some serious bullshit-calling. I have other things to do today.

For future aspirants to a BA in whatever, may I recommend:

That should save your waste of time studying useless shit.

I sure will, thanks.

I can't find the book anywhere though. Maybe this is the book you were referring to?

Electrical or Mechanical engineering for a 4 year degree. Law school, dental school, or medical school if you don't mind being in school for longer. You should read the book worthless by Aaron Clarey.

If you know any high school graduates, I strongly recommend getting them a copy of this book before they head off to college.

It's /pol/ack, not /pol/tard. The -tard suffix is reserved for /b/.
Also faggit OP needs to read Worthless.
Most degrees are for vanity. If OP did it right, he'd be in and out of any college in just 2 years with a 4 year degree and with 1/4 the amount owed compared to his peers if you don't include financial aid.

Student loan debt hanging over your head is comparable to divorce rape.

Most university degrees these days are worthless.

Unless your chosen career path absolutely requires it, learn the skills somewhere cheaper and get to work sooner.

&gt; Is a philisophy degree just stupid though?

Get and read Worthless immediately if not sooner. Don't piss away your parents' money on a worthless degree.

Then do philosophy as a hobby.

Don't listen to everyone who says to stay in college for the sake of college.

You have to look at college as an investment. Can you expect to be employed if you graduate? Did you pick a useful major? If you picked something that's useless, not only are you going to be stressing yourself out, you're going to put yourself into debt to buy garbage.

Also, don't go (or not go) to college for anyone other than yourself. You'll ultimately take the consequences of the choice you make, so don't let anyone else make this choice for you.
At the same time if you choose not to go to college, what's your plan? How are you going to make yourself useful to others to remain competitive in the labor market? A good first step is to figure out why you enjoy your retail job. Once you've found why you like retail, develop skills that go with what you enjoy. Before you know it, you'll have a skillset that you'll be able to use to get a job that pays well.

You just need to evaluate the market and make sure that whatever major you pick gives you good job security and high enough income. A rule of thumb I have heard is make sure the salary you are likely to get will pay off your student loans in ten years assuming you divert 10% of your income to that. If you want to be a very wealthy man, I suggest you pick petroleum engineering. Easily the best cost/benefit of just a Bachelors.

This book might also be useful to you in helping you pick which majors to avoid.

Now perhaps you have an interest in 17th century french literature or some such thing. That is fine, read to your hearts content as a hobby. Audit some classes being paid for by morons at your university. But don't waste your time getting certified in something useless.

I have a masters degree in environmental science from a top school known for its forestry.

Jobs are hard to to find and generally don't pay great (&lt;$50k). I work in the environmental sector dealing with regulatory compliance and industrial waste; I was unemployed for 9 months, and have been looking for a new job for a bit under a year now, nationally.

I've heard the book Worthless comes to a similar conclusion as my story has illustrated, for environmental science and engineering as well as most sciences:

There's a book called Worthless. It may not be totally applicable to your situation since the cost of tuition is so small, but it might help to take a look.

You may find this interesting:

Now that you are on a STEM track, you should be fine.