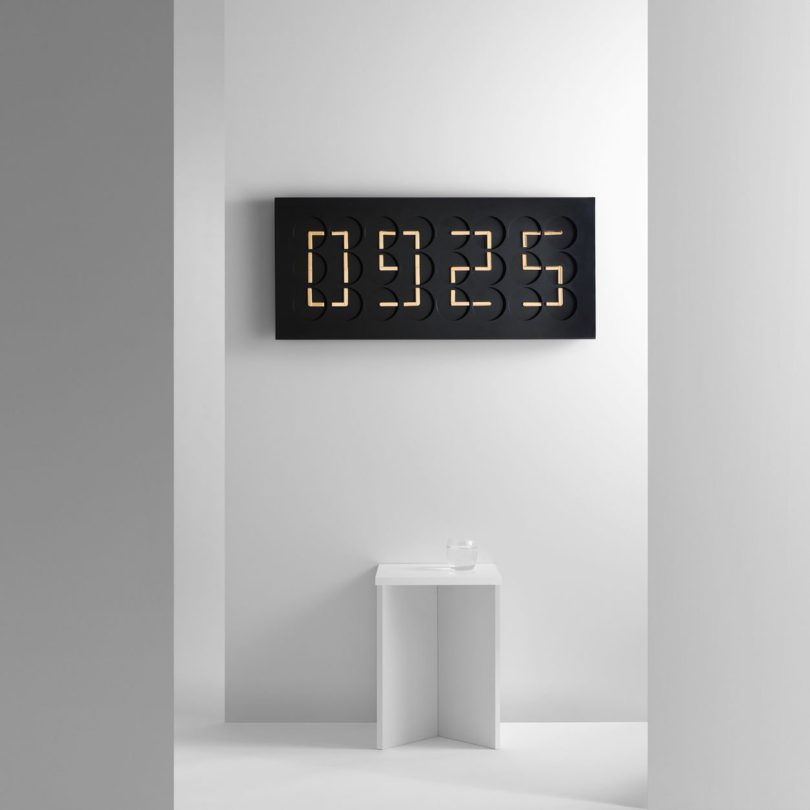 ClockClock 24 in Black, now available with 22-karat gold-plated hands, is a statement making object that re-contextualizes time through an ingenious marriage of analog and digital. Twenty-four clocks come together to create a unique digital display. The clock hands are choreographed, liberating the clocks from the sole purpose of telling time. The piece can be programmed in 12-or 24-hour time and has three different modes of movement between each minute: minimal, medium or elaborate.

ClockClock 24 combines technical precision and expert craftsmanship, resulting in the highest quality form. Each piece features 48 motors assembled within a minimalist housing, each set into a rectangular shape, a frame that allows the clock hand’s choreography to shine. The artists’ unwavering commitment to excellence in concept, design and technological innovation has created a design object with a lasting character. Made of Staron®, ClockClock 24 White Edition is produced and carefully assembled in Humans since 1982’s workshop in Stockholm. Includes USB power adapter and wall mount. Cord length: 9.8 feet. Two-year warranty. Produced in a limited edition of 250.

Founded by Per Emanuelsson and Bastian Bischoff, Humans since 1982 is a pioneering art studio famous for the creation of conceptual kinetic artworks that appear pure and simple but nevertheless utilize advanced technology. The pair was later joined by engineer David Cox who collaborated on the projects ClockClock 24 and A million Times. Today, the studio is comprised of a larger group of specialists who bring together a unique blend of expertise and intellectual curiosity, exploring the interplay of design, art and engineering.

Made in Sweden of Corian®, steel and electric components.