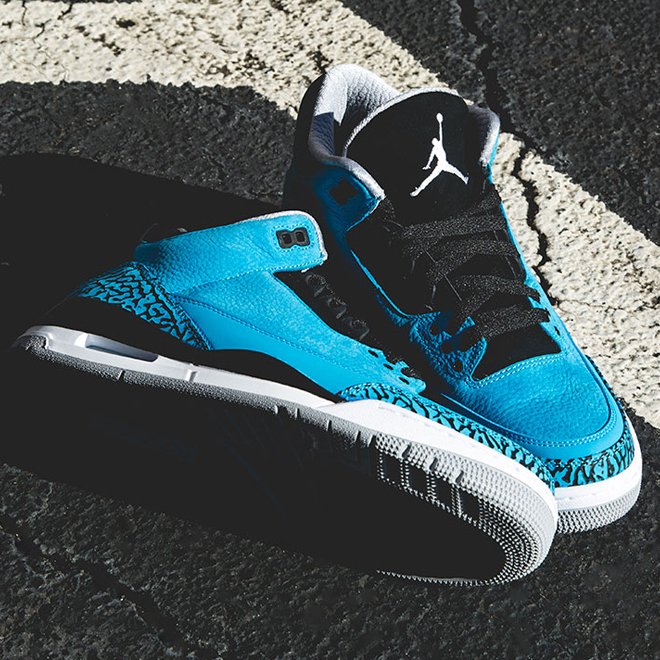 If there were ever a Jordan 3 colorway that seemed destined for the feet of UNC Tarheels basketball players, it would be the Air Jordan 3 Retro “Powder Blue” colorway. Back when Air Jordans began to become popular, Michael Jordan’s alma mater was often the inspiration for colorways. The original Jordan 9 and Jordan 10 were both created in “Powder Blue” variations that were eventually worn by players on the Tarheels team. Some 20 years later, the Air Jordan 3 Retro arrives in a “Dark Powder Blue” upper that screams UNC. What makes the Powder Blue Jordan 3 Retro quite unique is the way the Elephant Print is used. Of course the traditional placement of the toe surround and wrapped around the heel features the light blue with black print, but the Wolf Grey color of the inner lining also featured a subtle Elephant Print design on the Powder Blue Retro 3s. The official colorway for the “Powder Blues” is Dark Powder Blue/Black-Wolf Grey-White and even though it’s not an original colorway, the unique details and North Carolina-like color scheme made the Powder Blue AJ3 one of the most anticipated releases of the new year when it released in January of 2014. Subsequently, the Jordan 3 Retro “Powder Blue” colorway restocked a handful of times but seemed to sell through each and every time.