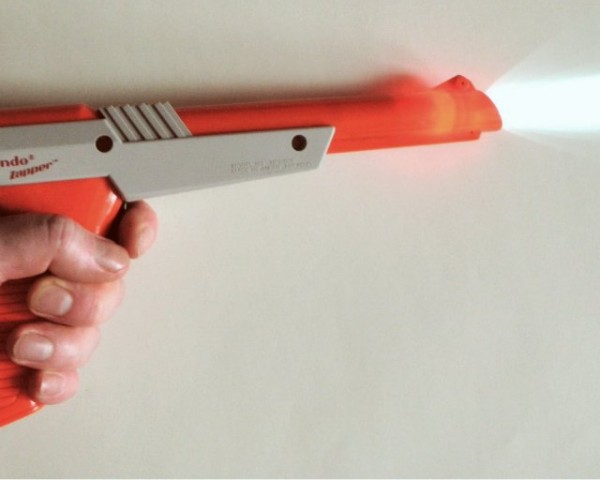 The NES Zapper (or Famicom Light Gun in Japan) is a pistol-shaped electronic light gun sold as part of the original Nintendo Entertainment System in 1985 and the Nintendo Famicom in 1984.

The Japanese iteration was a realistic portrayal of a revolver style hand gun, but when released in North America was made to look like an unrealistic science fiction ray gun that also tied into the design of the NES. The gun has no real grip; the handle is hard plastic.

Early Zappers were gray, but later the color was changed to a neon orange due to the fact that federal laws were passed in the US prohibiting toy guns from resembling real guns. It allowed players to aim at the TV.

Different games used different targets; for example, the player may shoot ducks, clay pigeons, and many other targets. The Zapper has a trigger action that takes quite a bit of force to pull back, and frequent trigger-pulling has caused many people to get tired muscles in their hands or forearms. (Modern light guns have much less resistance on their triggers, in comparison.) Also, the trigger makes a loud characteristic ‘p-kang’ noise when pulled.