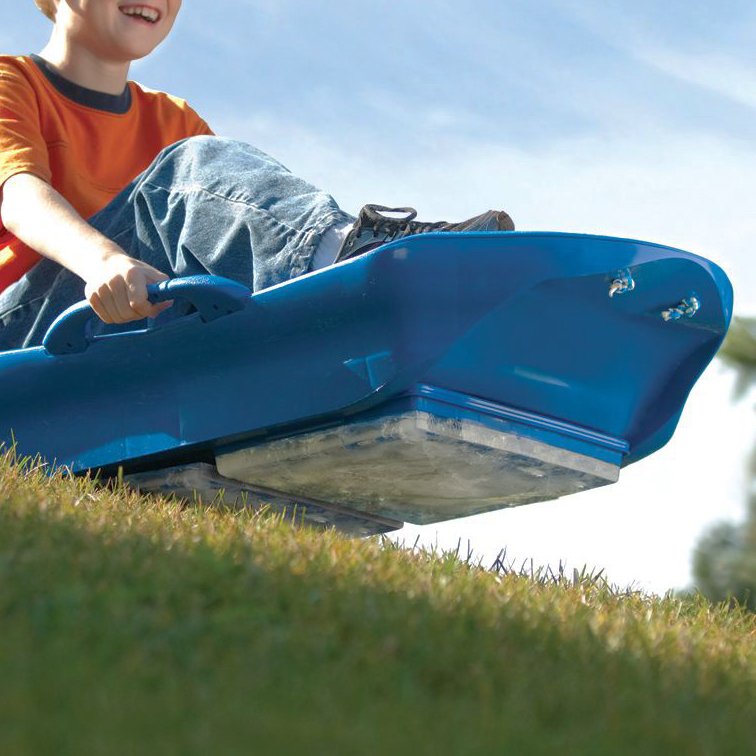 For snow sledding, the SLICERTM works like any normal sled that is placed on a slope that is covered with snow or ice. But to slide down grass covered slopes, just the opposite is done: instead of putting the SLICERTM on the snow or ice, ice is put on the bottom of the SLICERTM!

Inside the SLICER’sTM hollow, double-walled construction are two patent pending (in USA, Canada, and Europe) IcersTM that can be removed (from within the inside of the sled) and then used to freeze and form thin ice blocks that can then be easily attached to the bottom of the SLICERTM. When outdoor temperatures are above freezing, the melting ice provides for a very slippery surface, providing winter sledding fun in the summer!

The SLICERTM does not take a back seat to other sleds, either, when used in the winter on snow. Its smooth contoured shape and low profile runners enable it to work well on packed snow as well as deep powder. Owing to its double-walled, unibody design, the SLICERTM is able to absorb bumps while cushioning riders weighing up to 200 lbs. And its rugged polyethylene plastic design makes it less than the cost of many snow-only sleds.