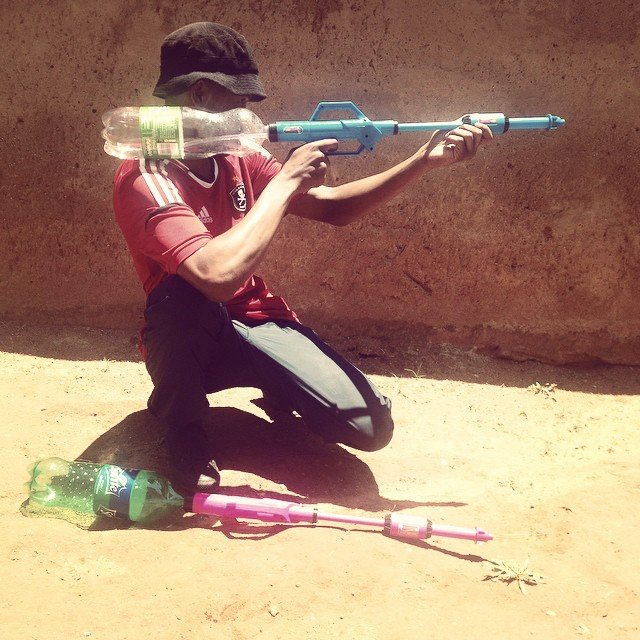 The Wazooka Water Gun makes water fighting EXTREME! Get ready to get wet with this wacky new weapon! Take Water Fighting To The Extreme! You’ve seen it all, water pistols, water balloons, water rockets – but you’ve probably seen nothing like this! The Wazooka Water Gun pushes water fighting to the limits with this awesome new design. Have you ever been in the middle of battle and found your water weapon to be empty?

You probably recall countless times when you rushed for the hose, frantically fumbled to undo the stopper so you can refill your weapon, and the merciless wettening you received from your friends because you became essentially a sitting duck. Well, the Wazooka Water Gun makes reloading easy, as the gun is powered by water bottle! Simply attach the bottle to the end of the gun and you are good for water so long as the bottle can provide it. If You’re Dry, You’re Not Playing Right! With the water bottle feature, you can keep many water bottles hidden about the battlefield for you and you alone.

When you find yourself shooting blanks, find one of your hidden bottles and make the switch. This allows for seamless water play during the fight; which, as anyone who has ever fought with water guns could tell you, makes all the difference. You’ll find yourself running around like Rambo, becoming your friends’ worst nightmare on the battlefield. They’ll leave the game wondering if there was ever a time when they were dry. So for a water weapon that changes the way the game is played and the fight is fought, charge into battle with the Wazooka Water Gun! Features: Plastic water gun. Water bottles not included. 19″ x 6.75″ x 2″