We found 22 product mentions on r/Electricity. We ranked the 57 resulting products by number of redditors who mentioned them. Here are the top 20. 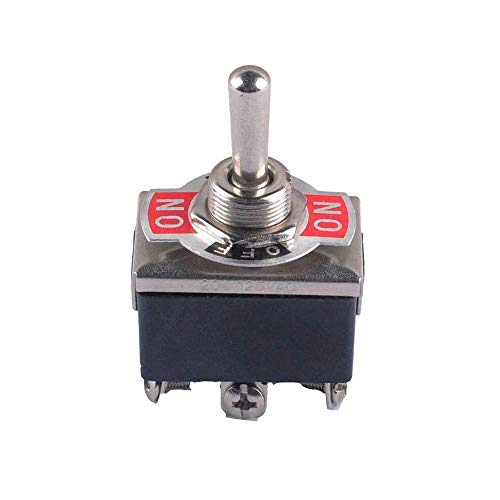 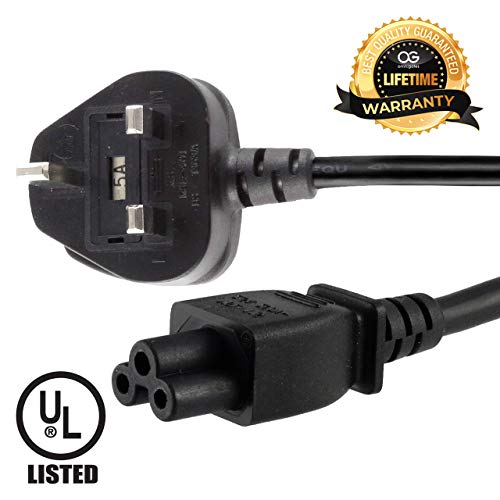 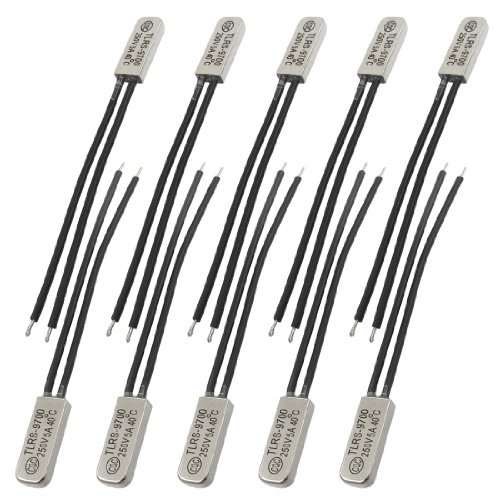 Sentiment score: 0
Number of reviews: 1
Automatically test the GFCI every time the Reset button is pushed in. The GFCI will not reset if the GFCI circuit is not functioning properly.Reduced depth of SmartlockPro Slim GFCI makes it easier to install in any electrical box, even shallow ones.Terminals allow for easy wiring options – back a... 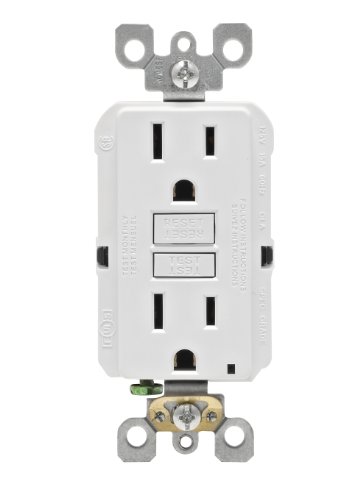 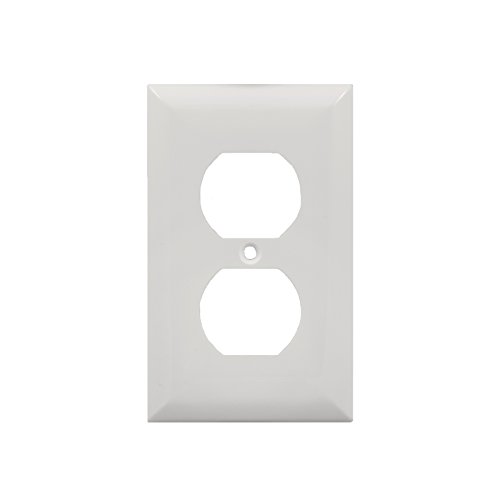 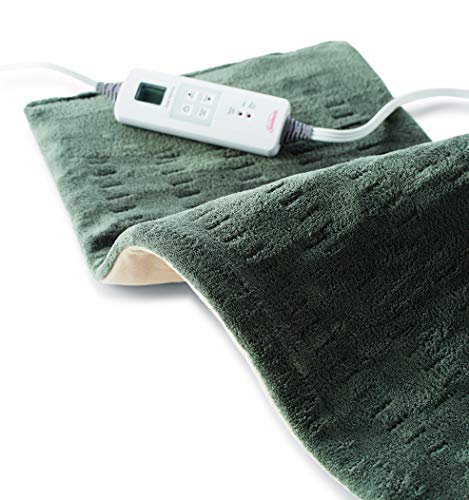 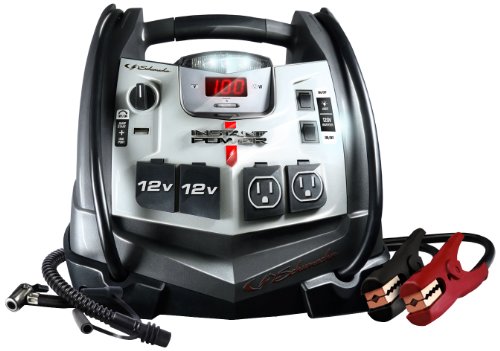 Sentiment score: 0
Number of reviews: 1
Life Time Warranty on Parts (Does not cover shipping cost)Works on children's bike or adult sized bike with adjustable length V-beltGood for charging 12V Batteries and Powerpacks through a blocking diodePermanent magnet generator puts out DC voltage no Rectifier needed.Output: up to 40VDC, 15 Amps n... 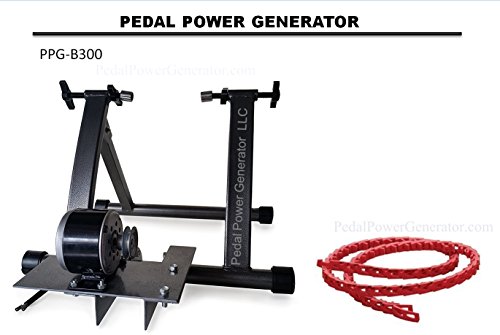 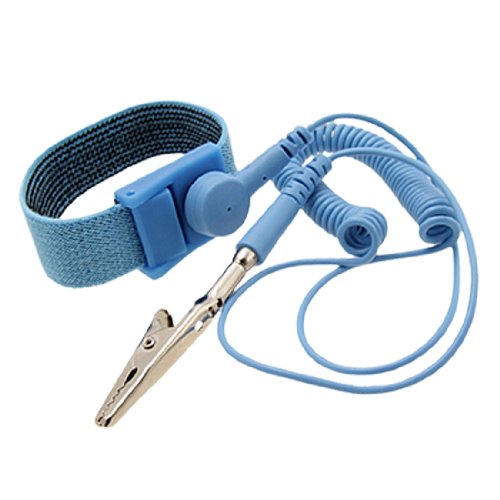 Sentiment score: 0
Number of reviews: 1
Adapter: Transform a light socket into an outlet when you need one with the GE Polarized handy outlet plugConvenient: Use in a space that might not have an outlet where you need in most like in your garage, workshop or shedEasy to Install : Turn off the light fixture, remove existing bulb, and simpl... 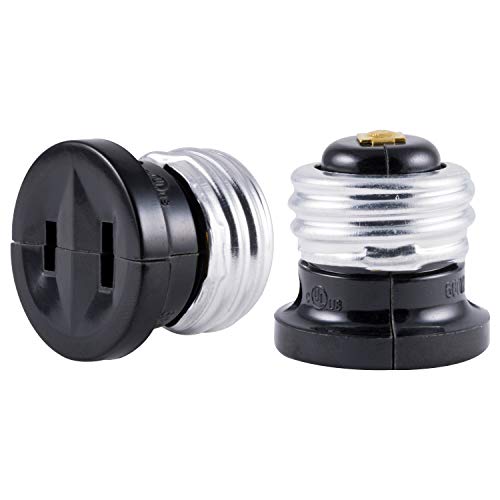 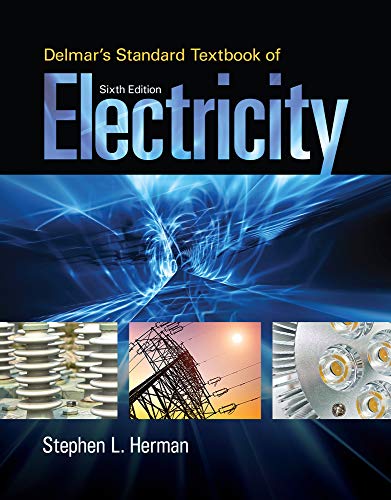 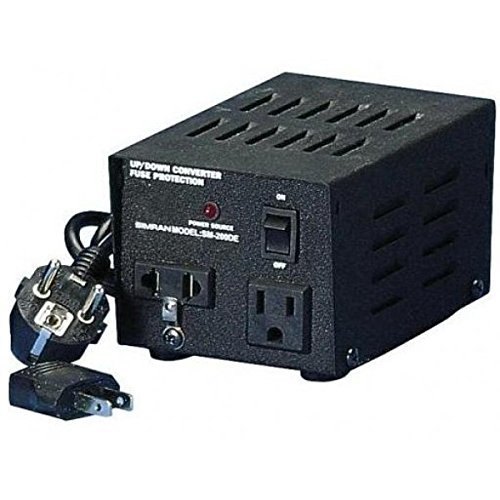 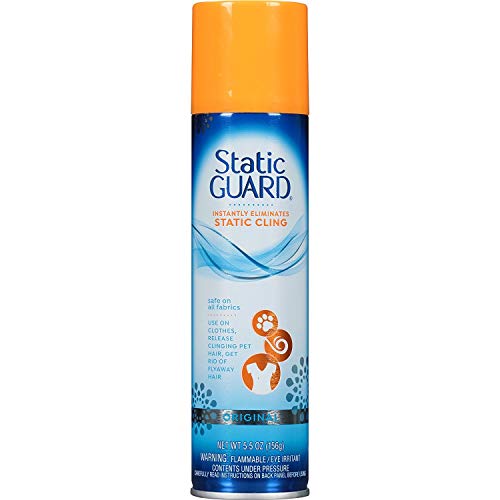 Sentiment score: 0
Number of reviews: 1
1500 watts continuous powerOn and Off Switch2 Spare Fuses IncludedGrounded Adapter IncludedNot compatible with North American 220VIntended for European 220-240 V and NOT for US 220 V 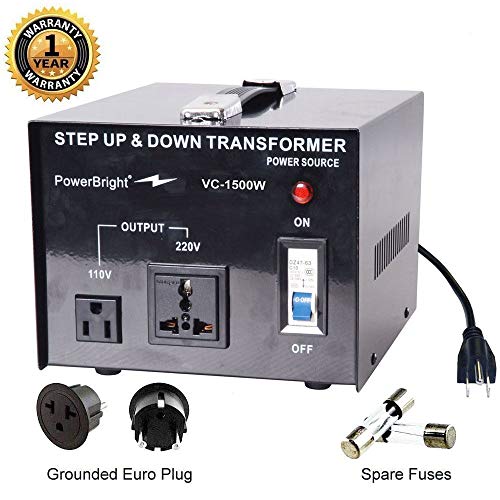 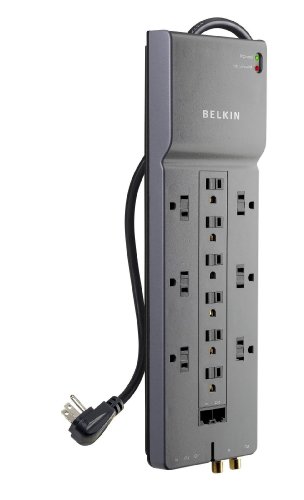 Sentiment score: 0
Number of reviews: 1
Multi-Outlet – Each adapter converts 1 AC outlet into 3 to turn your in-wall receptacle into a centralized powering stationConvenient – Adapter-spaced outlets allow you to power devices with varying plug sizes where you need it mostHeavy Duty – Constructed of rugged molded vinyl with a streaml... 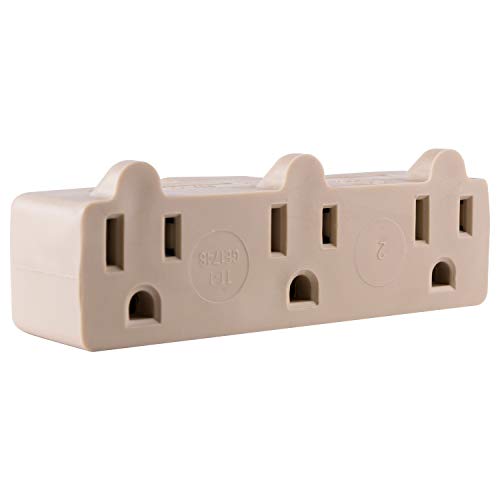 Sentiment score: 0
Number of reviews: 1
Offers a simple protective solution to prevent frozen pipes when you are awayEasy to install by simply plugging the unit into a lamp near the front of your home.The unit flashes the lamp light if the temperature dips below a preset level in your home so the pipes won't freeze and burstProvides tempe... 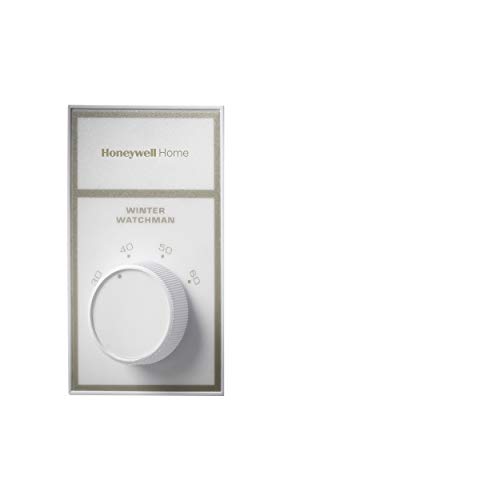 Sentiment score: 1
Number of reviews: 1
Ten-outlet surge protector with four-foot cordRight-angle plug keeps cord close to the wallAutomatically turns off power when not in use to help save energySuperior EMI/RFI filtering to 52dBBacked by a full two-year warranty for defects 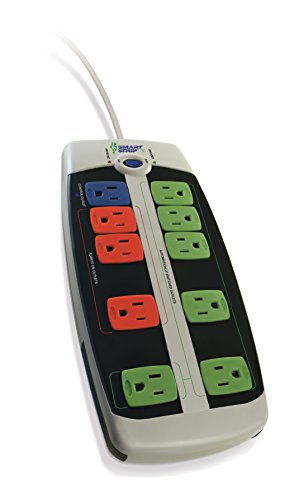 The two power supplies as far as the peltiers 'see' is the same thing as having one big one. I do think it may prove to be simpler wiring this way though, as you don't really want to mess with a bigger gauge wire than 8. I agree 8-10 is fine for this, I wouldn't go smaller. Make sure everything is fused.

Just think about what happens if the peltier gets too hot, would be good to have a way to trip the system and prevent things from going bad fast. The good news is thermal switches are not that expensive
edit: I think these are all normally-closed, you can select the temp you need. Make sure to analyze whether you need a normally-closed or normally-open switch for how you want to trip your system.

these ones are only rated for 5A, would be nice to have a few in paralell that could trip the whole unit off at a certian level - if it was a computer power supply you could use a bunch of normally-closed ones in series and use that on the pin that allows the PSU to turn on. Can also have one for each peltier and they can turn themselves on and off dynamically.

&gt; higher the output wattage the more expensive they get so this would only be suitable for relatively low power devices.

When I moved to England ~1983, I bought three 1.5 kilowatt step downs to run my items. Including a waffle iron I loved. I found them used but even new they are not that much. You should only need one of that size for things like heating appliances. 250 Watt one are fine for most computer/audio/video use.

Look to Amazon or Ebay. And the safest ones are real transformers. Not the switch mode ones suitable only for heaters.

I’d s try an smart strip first before bringing in an electrician to solve the problem. See if that solves your issue first.

Get a hold of an energy meter - something like this: https://www.amazon.com/P3-P4400-Electricity-Usage-Monitor/dp/B00009MDBU/ref=sr_1_1. This is for North America - so you need to find something equivalent for Europe.

Otherwise - just read the label on the microwave. The power output should be there. It should be close to the number you are looking for if you use the microwave on high power.

That particular one is made to replace the wall plate of a regular outlet. But Yes you can use splitters in a surge protector.

there was another post about ungrounded receptacles on here not to long ago where op was plugging in some audio visual hardware, you could try a Ground Fault Circuit Interrupter (https://www.amazon.com/Leviton-N7599-W-SmartLock-Non-Tamper-Resistant-Receptacle/dp/B0088XA58I/ref=zg_bs_6291366011_3/155-7421043-0265359?_encoding=UTF8&amp;amp;psc=1&amp;amp;refRID=8QBV6N8X5EQY4CPHWC48) Yours will look different than this obviously. Or you could try a easy plug in (https://www.amazon.ca/gp/search/ref=a9_sc_1?rh=i%3Aaps%2Ck%3Aground+fault+circuit+interupter+extension+cord&amp;amp;keywords=ground+fault+circuit+interupter+extension+cord&amp;amp;ie=UTF8&amp;amp;qid=1485901665) I've only used the second one for out doors for construction tools and don't know if either would fix your issue.
Do you know for sure that your outlets aren't grounded? And it's not just an issue with your computer as I posted before?

Kill-A-Watt is what you're looking for.

The problem you're having with your power meter is power factor. If you multiply volts x amps, you get apparent power in VA(volt*amps). To get watts, you need to multiply volts x watts x pf. Pf is cos(Θ) where Θ is the angle difference between the voltage and the current. Here's a good explanation.

this is the book that will take you through it. check out kijiji for a used copy maybe. very logical and in order

Could you use this?

Plug it into this and give him the appropriate amount of money every month.

Replace the cord. Here's one.

So a little more detail. I got a quote from the local electric supply shop and it turns out this saw is older then I thought. The frame for the old motor (204) according to the dealer stopped being standard in 1952 and produced at all in 64. He did find a Baldor 2hp motor for 596.00 plus tax and shippinp, I will have to get a new pulley and add a plate under it as the new motor is .5 inches shorter then the old one.

The dealer also recommended against a VFD as that old of a motor will run hotter and burn up. He could provide one for 400

Does this all sound correct? For reference this is the old motor

This is the quoted new motor. About 100 cheaper then quoted
https://www.amazon.com/gp/offer-listing/B007ZQRMH6/ref=dp_olp_new_mbc?ie=UTF8&amp;amp;condition=new

Won't warn if the light is out but will warn if it drops below a preset temp.

This is the exact surge protector used.

158V was observed with a single 60W load (verified by Logger Pro at a later time) 12V power supply on the opposite side of the plug that was measured. The power supply continued operating as normal when directly connected to the wall, with no odd variances in Vin as compared to the wall.

A second test was run un-loaded. In this test, voltage averaged ~145V over 3 minutes, ranging from 109V to 155V. Another multimeter was used on the second outlet of the same wall plate to verify voltage into the strip. It held constant at 122V +/-1V for the entire 3 minutes.

Load calculations were done on all pieces connected to the power strip, and it was found that the load used was less than the advertised maximum load.

All of these tests were either L-N or L-G, I believe that I attempted G-N, but I have no exact information written down, so it was either 0 or at the time I felt it was non-consequential. I will go back and check this value again.

The general consensus so far has been that there is no way that the voltage could have increased from the power supply, so I instead went back and looked at all damaged components. In each of the failed items, one of two items were broken. The first was the fuse on the input voltage. Sadly, the design of the power supplies make it impossible to replace the fuses, they serve as a one-time defence against surges, hence why a surge protector would be handy. The second component was one I could not identify, it was a vertical ceramic disk with 2 wires coming out. It is connected in line to the live line coming into the device. According to the manufacturer, these can be damaged when too high of a voltage or current is attempted to be brought through (Rated for 120V +/-10V, 3A +/-.1A). In 2 devices, a fuse was blown, in 3 devices, the piece mentioned above exploded, resulting in electrical smoke, and in 1 device, both components failed, again resulting in electrical smoke.