Reddit reviews Dungeon Hacks: How NetHack, Angband, and Other Roguelikes Changed the Course of Video Games

We found 7 Reddit comments about Dungeon Hacks: How NetHack, Angband, and Other Roguelikes Changed the Course of Video Games. Here are the top ones, ranked by their Reddit score. 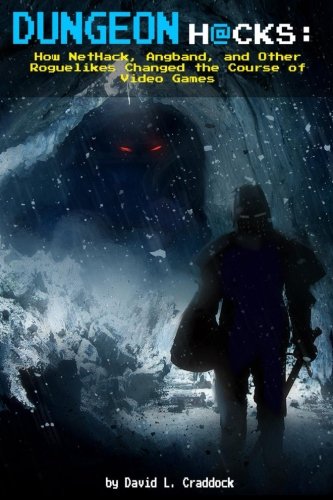 7 Reddit comments about Dungeon Hacks: How NetHack, Angband, and Other Roguelikes Changed the Course of Video Games:

I agree that books explicitly devoted to Roguelikes are rare, let alone for Roguelike Development. In fact, I only know of 3 related to either:

I think Angband benefits from the fact that it's still actively being changed and modernised. The current official maintainer of vanilla Angband is particularly keen on making the game fit better with modern play sensibilities. It's still very much Angband but it's designed to have a livelier pace, and some elements which used to be a bit of a grind (going back to town and selling stuff at the shops) have been reduced or removed.


It's still very much Angband and, as such, is a fairly old-school dungeon grind. But it hasn't dated as much as it could, in large part thanks to the changes made over the last couple of years or so. Of course, there are still those who will prefer older versions, but luckily most of the whole back catalogue is still available.


Curiously, I actually find that many of the variants now feel more dated than vanilla, simply because most are based on older versions. I've seen the name Frogcomposband thrown around a few times, though I don't know why. I haven't really played it. For me, the best Angband variants are the ones which either make the game shorter or turn it into something different. For the former type, Quickband and Tiny Angband dramatically reduce the length of the dungeon and also accelerate character advancement accordingly (Tiny is my personal favourite of the two). For the latter type I'd go for ToME2, though Halls of Mist has always intrigued me.


So yes, both Angband and its variants are still worth playing, but which variants and which incarnation of vanilla you'll enjoy depends on your preferences. Regardless, you should prepared for the reality that Angband in all its forms is fundamentally a grind. That's something which has fallen out of favour a bit these days, but I think it has its place. And personally I'd rather have Angband than Nethack. Infamously, Nethack relies on spoilers, while according to Craddock's Dungeon Hacks book, Angband was intentionally conceived to have little to no need for spoilers.

There's Dungeon Hacks which came out just a few months ago. You can also find a fair bit of history on places like Roguebasin (see the sidebar) or often just the official game sites.

Not that I was trying to make it an attribution game. Hey, I'm just mentioning what it says on the wiki from a cited source. If they wanted to say that Star Trek and Adventure were the primary influences behind Rogue, who am I to argue?

What are dictionaries? What is Wikipedia? What is google? Sorry if I'm being flippant, but the whole "language is fluid and nothing can ever truly be defined" argument is hogwash. In the case of an authority on the matter, or with enough common consensus, words can be defined and generally accepted for what they are across various groups of people. In this case there are a good handful of authorities on the matter. Also a fair number of journalists, news sources, and various users that can agree.

I think it's disingenuous to say roguelikes cannot be defined well enough for people to understand what they are (or really most words, for that matter). It's fair to say many don't understand or know what the term really means, but I'd wager they haven't even bothered to try google, which immediately gives a clear and concise definition from Wikipedia at the top. All it takes is doing a bit of research.

According to the book Dungeon Hacks, which covers the history of the Rogulike genre, both hack and moria where clones and not forks. Back than rogue was not open source and neither the creators of Hack nor Moria had access to the source code.