We found 9 Reddit comments about Hell In A Very Small Place: The Siege Of Dien Bien Phu. Here are the top ones, ranked by their Reddit score. 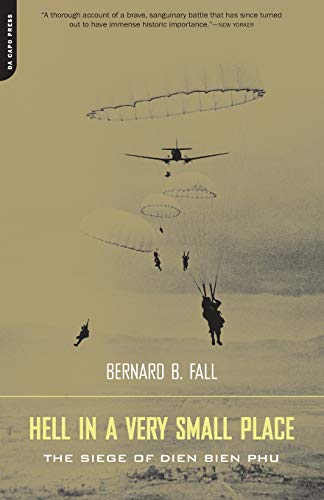 9 Reddit comments about Hell In A Very Small Place: The Siege Of Dien Bien Phu:

"Hell in a Very Small Place" taught me how insane they were in Vietnam. They had guys make there first Airborne jump, into an encircled DZ. Like holy shit.

Also made you appreciate how good of a general Giap was. One of the best books about a battle I've ever read. The author sadly died in Vietnam when he was reporting on the American effort there.

It's kind of frightening to think that there's so much to learn about the last 150-200 years just to be able to get some sense of of it all. We teach our children almost nothing in school and, somewhere along the line, being well-read became socially unacceptable and "good" writers fewer and farther between.

By the way, if you have any interest in French military history in Indo-China and Algeria, I can suggest:

Hell In A Very Small Place: The Siege Of Dien Bien Phu

Street Without Joy: The French Debacle In Indochina

I find military history a good starting point to researching who\what\why\how of any particular time and place.

I'm also fond of the history of The Crimean War; absolutely fascinating glimpse into the start of what many would consider "how it all ended up this way". Just really neat history that branches off in so many directions.

Most books pertaining to the American war in Vietnam trace its origin in the French conflict, though. If that leaves one longing for more, Street without Joy and Hell in a Very Small Place were recently reprinted, and Fredrik Logevall's Embers of War fills any holes left by Bernard Fall, really.

One of the best books I ever read was about the French in Vietnam.

"Hell in a Very Small Place"

They were airdropping in troops into a DZ that had been encircled by Vietnamese forces. They learned that it was better if the paratroopers were going on their first jump versus second/third jump as they would be less likely to seize up.

Some of my reccommendations

Anthony Beevor's books on Stalingrad and The Fall of Berlin

Osprey's book on Infantry Anti Tank Tactics. I thoroughly enjoyed this and gave me some insight into tactis that I can try out in the Combat Mission games.

First, I would recommend two books by Bernard B Fall, a French war correspondent and historian. They are peerless historical accountings of the First Indochina War, and are essential to understanding the American debacle in Vietnam. His analysis of the failings of the French were a direct warning to the US, which were largely ignored, resulting in a predictable failure. He died in 1967 while embedded with US Marines in Vietnam after stepping on a mine.

Almost anything by Bernard B. Fall.

Street Without Joy for a history of the French involvement
https://www.amazon.com/Street-Without-Joy-Indochina-Stackpole-ebook/dp/B001GIPFD2/ref=la_B000APUSOI_1_1?s=books&amp;amp;ie=UTF8&amp;amp;qid=1505155856&amp;amp;sr=1-1

Last Reflections on a War -- If memory serves, he actually had at least one interview with Ho Chi Minh in that one.
https://www.amazon.com/Last-Reflections-War-Bernard-Fall-ebook/dp/B005JYXU1S/ref=la_B000APUSOI_1_4?s=books&amp;amp;ie=UTF8&amp;amp;qid=1505155856&amp;amp;sr=1-4

Others in the thread have recommended some really great books. My two cents would be to add Hell in a Very Small Place looking at the siege of Dien Bien Phu, the end of the French occupation in Vietnam, and the rise of Ho Chi Min as both a military and political leader. Really good read.