We found 20 Reddit comments about Love to Dream Swaddle UP, Gray, Small, 8-13 lbs, Dramatically Better Sleep, Allow Baby to Sleep in Their Preferred arms up Position for self-Soothing, snug fit Calms Startle Reflex. Here are the top ones, ranked by their Reddit score. 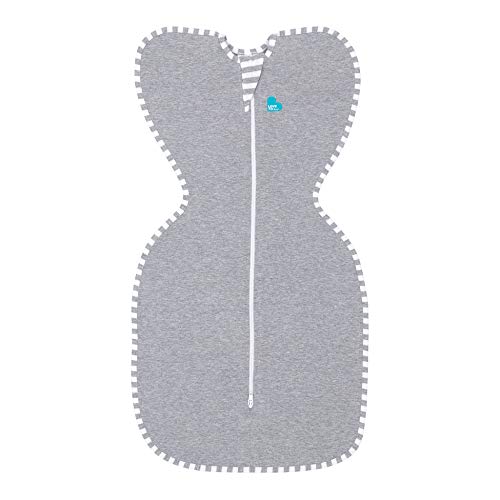 Swaddling has been around for ages as it helps to prevent the startle reflex. But forcing the baby’s arms to their sides or over their chest prevents two natural behaviors that frustrate the baby and they fight to get their hands free.First - Over 90% of babies sleep with their ARMS UP around their head when placed on their back to sleep. This is simply a baby’s natural and preferred way to sleep, just like in the womb!Second - All babies are born with the need to SELF-SOOTHE by touching their face and sucking on their hands as they did in the womb. This medically proven behavior is how a baby calms and falls asleep on their own. Traditional swaddling prevents this.The patented wings on the Swaddle UP allow the baby to both sleep with their arms in their preferred ARMS UP position and gives enough movement so they can SELF-SOOTHE, all while calming down the startle reflex.The snug fit from our 4-way stretch fabric of 93% Cotton and 7% Elastane creates a familiar and secure feeling just like in the womb to calm the Moro (startle) reflex. Does not contain flame retardants or any harmful chemicals.
Check price on Amazon

You could do a wearable blanket so she can move her arms like she likes.


Edit: another option could be this. My son isn't a huge swaddle fan cuz he really likes to put his hands up by his face and spread his legs and he sleeps pretty well with this.

I’m not the person you replied to, but when my baby kept breaking free of all other swaddles, we ended up using a zippered, arms-up swaddle. Like this: love to dream arms up swaddle. They’re stupid expensive but they worked well for my little one.

These are all things that not only I love but a lot of people in my bumper month group really liked as well, and that I didn't think to ask for in my registry and wish I did:

VAVA nightlight
USB charged, this touch operated nightlight was my best friend in the hospital and at home for late night feeding

Our little one will wiggle herself awake if we don't swaddle her. We have a halo and swaddle me up Velcro swaddle. But the one we end up using almost every night is the love to dream zip up swaddle. Bonus it has hands up and she can still self soothe by numbing on her hands without escaping.
https://www.amazon.com/dp/B0081GJ038/ref=cm_sw_r_cp_awdb_t1_AgZQAbQG555B8

The Love to Dream swaddle was a huge help for us because there's no way it can bunch around the mouth! We also like it because it zips up from the bottom for easy diaper changing and it allows LO to suck on his hands for self soothing. If you prefer for your LOs arms to be down try the Halo Sleepsack Swaddle which also stays put pretty well, you just have to pull it tight. They have them in fleece as well if you want your LO to be a bit warmer.

This has been a good night-swaddle-to-sleep-apparatus for our newborn. The first three weeks were a sleepless nightmare. The last three weeks have been much more restful.

You should try different swaddles. We switched to the Swaddle Up Love to Dream for our second (our first was also a terrible sleeper), and it was a game changer. I also heard the Merlin suit was amazing as well. Links below, good luck.

Take your lady, if that's a thing, and go to a store that sells baby stuff and has it all out. That way you can look at all the things and see what you, and more importantly she, likes.

I like Graco, as a company, so we bought mostly stuff from them. And the more stuff works together the nicer it is. We got a carseat that has a base and your baby carrier "snaps" into it. Then you can carry them in that carrier and it can also "snap" into the stroller, so it all works together. so FIND A COMPANY you like and just get one. TBH, strollers, or.. did you call them prams? Have to meet safety standards, so they will all be fine. But figure out how small they fold up too, for transport and storage. Also, if you live in an area with rough terrain, like rocky roads, dirt paths, cobblestones, etc., consider one with large bike tires rather than small plastic wheels. It takes up more space, but it is so much easier to push! They call them jogging strollers. I don't jog... but after one trip to the pumpkin patch which had several hundred feet of crushed stone you had to get across... I went and bought one used.

I also found something REALLY useful called a "rock and play", which is like a rocking sling bed you can put the baby in. Ours actually had a little mechanical foot that let it rock itself. It is a safe place you can put baby down when you need to do something else, like do laundry or feed yourself.

Finally, some babies need to be swaddled to sleep, which means wrapping them up like a burrito. It's pretty easy for them to get out sometimes though which wakes them up. So, they make "sleep sacks" that represent the swaddle but they are zippered. We found one called the Woombie that worked well for us. I think it was like this.

Oh! And don't be afraid to get stuff used. You may not want to, but some of it, like, you barely use, and it's still fine. Especially clothes. Sometimes you get clothes and they don't even wear them because you forget about it, or it gets lost, or you just don't like it, or they are the wrong size for the weather. Also shoes! Baby shoes are stupid expensive, so try to find some cheap at yard sales in various sizes. Throw them in a box and by the time baby needs them, you'll have a bunch. But use common sense. Probably don't buy a used carseat, because you don't know what happened to them, but maybe a pack and play and definitely clothes.

Yes! I do the same setup for naps as nighttime. I also love these sleep sacks. Stops him from startling but allows more movement and he can still use his hand to keep his paci in his mouth to self soothe.

Sounds a lot like my daughter! Once we tried one of these vs. a regular swaddler she started sleeping a lot better. She was still up a few times a night but it was a LOT less.

We started doing Ferber at 6 mos and didn't really follow through, because it is hard. Then tried it again around 8 months and she really took to it then. I feel like it's really hard to "sleep train" a baby under 6 months and I know it really sucks and seems never ending now but it does get better. We go through periods were she sleeps almost all through the night (maybe one wake up) and others where she wakes up 2-3 times but never really any more than that and it's usually due to teething or having a cold.

My kid always broke out of the swaddle. At 2 months he was transitioned out of a swaddle to zipper swaddle that keeps his arms up and then a sleep suit at around 4 months.

I thought this may help my fellow new parenters out there. If you're anything like me, you scoured the internet checking off every "must-have" baby items list before your LO was born, but I still ended up having Amazon deliver things about every other day for the first couple months.

As a disclaimer, I'm not saying these are MUST HAVE items. I just went through my Amazon purchases and I'm writing down some things that I purchased in those 3 AM wee hour Amazon shopping sprees.

Here's a compilation of everything that I felt I missed in my preparation for my baby girl:

Mine prefers the Halo sleepsack, but we got a Love to Dream swaddle too which works pretty well: https://www.amazon.com/dp/B0081GJ038/ref=cm_sw_r_cp_apa_Ft5TAb05BYX40

Have you tried to swaddle with hands up? My first hated being swaddled too, with her arms in, and this one she liked and it kept her from waking herself up (she used to rub her face/eyes in her sleep then wake up). Love To Dream Swaddle UP Original, Swaddle Blanket 1.0 TOG, Small 3kg-6kg, Grey https://www.amazon.co.uk/dp/B0081GJ038/ref=cm_sw_r_cp_api_i_AMeQDb1B650SH

Does he like sleeping with his arms up? The Swaddle Up was a lifesaver for us. At six weeks you're likely just starting the second wonder week, which was the worst for us. Thankfully at 9 weeks old her fussiness and colicky fits disappeared.

This was a great transitional swaddle for my LO: Love To Dream Swaddle Up Original https://www.amazon.com/dp/B0081GJ038/ref=cm_sw_r_awd_vLEaub0VEPQM5

First of all, congratulations! That is so exciting.

The two best things we got for our newborn, other than the obvious completely required things like a carseat, place to sleep, and diapers: