We found 7 Reddit comments about No True Glory: A Frontline Account of the Battle for Fallujah. Here are the top ones, ranked by their Reddit score. 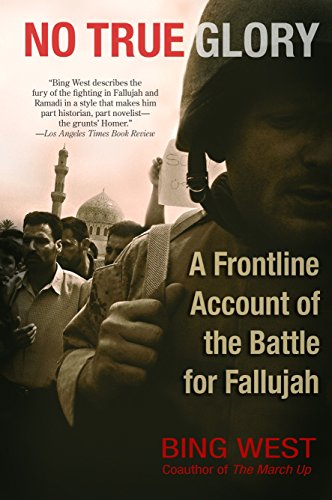 This, I presume? Link for the curious. I will have to find a copy.

"The composition and leadership of the insurgents were changing. As the FREs (Former Regime Elements) weakened, (Col. Brian) Drinkwine received warnings that foreign fighters were infiltrating into the Jolan, including the arch-terrorist Abu Musab al Zarqawi...On a night raid two Egyptians were arrested in an apartment with slogans supporting bin Laden scrawled in sheep's blood on a wall. Neighbors told a reporter that foreign fighters were threatening people who played Western music, styled their hair, wore revealing clothes, or even sold wood to contractors for the Americans."


"We heard the Islamic fundamentalists were starting to taunt Saddam's guys, saying the old army guys didn't have the balls to take on the Americans...We saw a change in tactics."


"The Iraqis never tired of talking, issuing long litanies of complains, making passionate promises of stability, and stoutly denying the presence of foreign fighters. The Fallujans were good people, fighting to protect their city. If the Americans would stop firing and pull out, all would be well. It was never clear, though, who spoke for the fighters. Those with the power of the guns remained shadowy figures, never mentioned by name."


"During the third week of April...Bremer's experienced deputy...chaired four sessions...to resolve the siege... Every day rusted and broken weapons were turned in as symbols of progress while the violence continued. As for expelling the terrorists, the negotiators denied they existed. Foreign fighters, they said, were a myth and an excuse to punish the city."


"(American LtCol Byrne asked) 'Can we agree that we share the same goals? That we both want the heavy weapons and the foreign fighters removed from the city, do we not?' (Former regime LCol. responded:) 'That is an American story. There are no foreign fighters...we take care of security by ourselves. If you are not here, there is no problem.'"


"(Muhhamad Latif, a colonel in the intelligence branch who had been imprisoned for seven years by Saddam) and the city elders met with Mattis, explaining that the people of Fallujah wanted no help from outsiders...Latif denied there were any foreign fighters in the city"


"Foreign fighters from Syria and Saudi Arabia trickled into the city. The insurgents organized a ruling council, called the Mujahadeen Shura, which moved into a mosque in the center of the city and issued written passes for Arab journalists to visit the 'liberated' city...The reign of the Taliban had descended on Fallujah."


"Neither the American nor the Arab press called particular attention to the proliferation of terrorist safe houses in Fallujah, while the city elders vehemently denied Zarqawi existed."


"'For the sake of your city,' Mattis said, 'you must tell Zarqawi and the Syrians to leave. They are killing your innocent fellow countrymen.... Get them out.'" (Chief negotiator Imam Abdullah Janabi replies) 'Someone gives you bad information... there are no foreigners here. You bomb innocent people. We only protect our homes when you come to destroy.'"


-- No True Glory - A Frontline Account of the Battle of Fallujah

More recent, but I was impressed by No True Glory by Bing West. It's an account of the battle(s) of Fallujah in 2004. There was rumored to be a movie in the works at one point but it looks like there's no progress.

Two badasses talking about one badass's actions that earned him a spot amongst the Gods? Hngggggg

Also, if you guys haven't already, definitely check out all of Bing West's other books, especially No True Glory. He paints a very real, vivid, accurate, and what I feel is non-biased picture of Iraq at the time, as well as how Fallujah came to fall [and eventually be retaken].

It also chronicles the life of one of daily inspirations.

The US took a break to have an election in 2004...and it wasn't going all that well in the first place. Source

&gt; War is becoming automated. We don't march 40,000 troops across an open field to take a town anymore.