We found 4 Reddit comments about Our Earth's Secrets Raw African Black Soap, 1 lb.. Here are the top ones, ranked by their Reddit score. 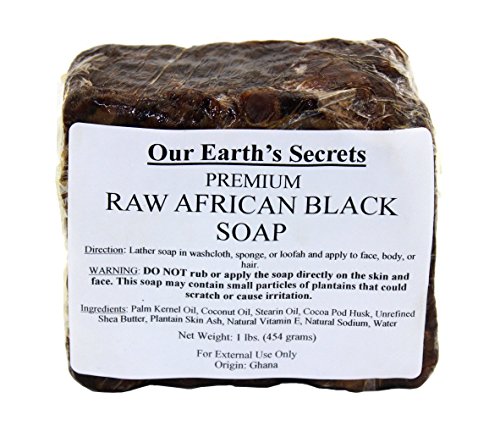 So I did a lot of research on it before I bought it and apparently anything you can buy off the shelf at a store is either fake or altered, which means it’s not “real,” in a sense. Real African black soap will look sort of like someone threw it up and have an earthy, grainy texture to it. There’s no lye used when they make it (if someone who understands soap more than me can step in here I’d be grateful) which makes the whole bar less consistent.

Ideally you want to choose one that says that it was made in Ghana because then you know you’re getting the real thing and not a bar of soap that was dyed black for laughs.

Anywhoo, onto my experiences...the internet told me that it’s too harsh to apply directly to the skin, so after I take my makeup off, I wet my face down and rub the soap with my fingers until a brown, oily substance coats them, from there I can massage it into my face for a few seconds. I was surprised the first time I used it because I wasn’t expecting it to foam up and it kind of does. Once I’ve got it rubbed all over everything (not my eye area), I let it sit for like 5 seconds and then I splash water onto my face to get it off.

Before I had any kind of skincare routine I had a lot of built up dead skin on my face. I’d guess that I probably had dehydrated skin because no matter how much I moisturized it was still gunky. We’re talking blackheads everywhere and I could scrape the skin off in the shower. Now that I have a better routine (going on a year now) my skin is more clear and definitely a normal skin type, I absolutely think the soap being so strong has a lot to do with that.

If you’ve never used it before I’d say start with once or twice a week and see what happens. I find that my skin feels “squeaky clean” after I wash my face but not horribly dry...I definitely need to re-add hydrators and moisturizers after I use the soap but my face doesn’t feel nearly as tight as, say, if I’ve gotten out of the shower after just using straight water without any cleanser.

If you do decide to go for it see if you can find a bar that’s not a 1lb brick though, I thought a pound was a good choice and no joke, using it just on my face, 7 days a week, I have a decade’s supply. My boyfriend’s young daughters will be getting African black soap gifted to them on their 21st birthdays. I don’t know what to do with this amount of soap.

But that’s enough of this rant. I hope I answered some questions!

My daughter has extremely sensitive skin and all detergent based (SLS and the like) soaps irritate her skin. Here is what we found the most success with (after trying many!) They were not irritating: Dead Sea Salt Soap, African Black Soap, These are simple traditional soaps. They lack all of the extra ingredients and harsh detergents that are in usual drugstore brand soaps and body washes. She uses a single ingredient oil afterwards like sunflower oil or jojoba oil. Good luck!

I have been using african black soap for years, but i like the ones you buy in a big block a lot better than the shea moisture bars. I think many people find it to be quite drying, but it keeps my skin more clear and balanced than anything else I've ever used.