Reddit reviews Tony Bath’s Ancient Wargaming: Including Setting up a Wargames Campaign and the Hyborian Campaign

We found 2 Reddit comments about Tony Bath’s Ancient Wargaming: Including Setting up a Wargames Campaign and the Hyborian Campaign. Here are the top ones, ranked by their Reddit score. 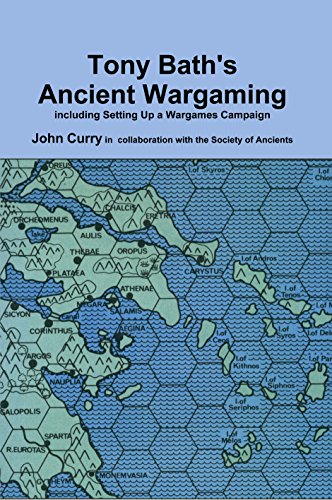 2 Reddit comments about Tony Bath’s Ancient Wargaming: Including Setting up a Wargames Campaign and the Hyborian Campaign:

It sounds like what you really want is a campaign system for miniature battles- like how Mighty Empires handled the movement of armies, then you used Warhammer to fight the actual battles. You can probably find a pdf of Mighty Empires pretty easily and see if it's in the right direction.


Unfortunately your other options are kind of random as far as availability- Warmaster ancients had a campaign system, but is OOP. There is Theater of War for Piquet, but Piquet may be a little too niche for someone without much background or a willing mentor. Field of Battle 3 from the same company is also promising a campaign system, but is a few months away from being available.

You would also probably be interested in Henry Hyde's 'Wargames Compendium' and upcoming book on wargames campaigns- he's big on generating 'Imagi-nations' and then fighting out their history over several years. And of course the grand-daddy is Tony Bath's "Setting up a Wargames Campaign", now available as a reprint combined with his ancients rules.


Or you can try to find a higher level boardgame and use that for the big picture, with either a tactical level boardgame (e.g. Command and Colors or ASL) or miniatures game for the actual battles. This requires you to figure out how to translate the big picture game to the smaller, but for historical games should be relatively straightforward.


Finally, I should point out The Perfect Captain who does a lot of this kind of thing- a simple board to handle movement of armies, then a minis game to fight the battles.


If this all seems kind of ad hoc, it is. The type of thing you're describing is a lot of people's holy grail, but outside of Mighty Empires and Warhammer it hasn't really been tried by a bigger game publisher.

You can actually buy it on Amazon Kindle, since it's in Tony Bath's Ancient Wargaming.