We found 21 Reddit comments about Viair 00088 88P Portable Air Compressor. Here are the top ones, ranked by their Reddit score. 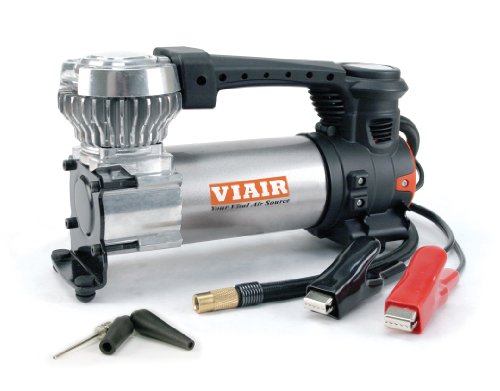 In case anyone is looking for an air compressor now, I have this one and it works like a champ: http://www.amazon.com/gp/product/B005ASY23I?psc=1&amp;amp;redirect=true&amp;amp;ref_=oh_aui_search_detailpage

The 150 is the better bet because it's clip on, instead of cigarette lighter. But if you're gonna pay retail prices, might as well just go this route https://www.amazon.com/Viair-00088-88P-Portable-Compressor/dp/B005ASY23I

Hose &amp; cord is plenty long, however I bought a 6 foot hose extension just in case.

It gets hot, I bought a nice canvas bag to keep it in, I've had no issues with the heat besides accidentally touching it and getting a little burn.

This is the one that I have. Works on tires up to 33". Requires you to connnect to the battery terminals while the car is running. It works really well and have used it 10-15 times on my own and other peoples cars without issue. It has a built in psi meter but you have yo switch the unit off to get an accurate reading. Also very quiet compared to pancake style compressors.

I've owned and used this compressor over the past five years and it's been great. Viair 00088 88P Portable Air Compressor. It does connect directly to the battery but that prevents blowing fuses when trying to use the 12v outlet in most cars.

On battery jumpers I've tried a few but found the GOOLOO 800A Peak 18000mAh SuperSafe Car Jump Starter works very well. I've owned three of them. The first time I had to use it was after it had been sitting in my trunk for six months without a recharge and it worked like a champ. I gave that one to my brother in-law as it was his battery that was dead and we were parting ways after a road trip vacation. I bought a replacement and have used it probably a dozen times, often when I see someone with their hood up in a parking lot and offer them a jump start - works every time.

That's the best one overall if you check the specs out. I love my HPDE's so a pump is necessary, this thing pumps QUICK.

I picked up something like this and carry it with me everywhere. I've only used it for myself once after running over a box of screws in the middle of nowhere, but I've helped out quite a few people with it.

Definitely get one. I think mine was like $60 on Amazon and it works great. My dad uses his more than I do, paid less for it, and it seems to be faster than mine. Link below is what he has. Don't be fooled by the duty cycle, I've seen him inflate all 4 of his 33" tires from 12 to 30 psi without stopping, then pass his compressor to someone else to do the same. https://www.amazon.com/gp/aw/d/B005ASY23I/

Here you go! It hooks up directly to your battery with jumper leads. It's pretty quick. Filled up my Jeep and my friend's Jeep, probably a little over 10 minutes for both together. Now he bought his own so we can do both Jeep in about 5 minutes with two compressors

Get an air pressure gauge and a small compressor. If you buy the really cheap and crappy ones they'll break as soon as you look at them - I really like this model:

Would buy again. A phone holder is good, extra charging cables (never enough), carry some rope, a tarp, some paper towels, maybe a couple bottles of water for cleaning up. Usually there's room down near where the spare tire is for some of this.

Viair 88P! I have owned mine for a couple years now, very nice to carry under the rear seat! Everything included reaches from the battery post (passenger side) to the driver side rear tire(farthest stretch). No need to buy any other accessories!

This is the pump I bought, so I think it would be strong enough to pump it without lifting the car but Im not sure (I don't know jack about cars...this is my first one in a very long time!).

I also bought a bottle of Slime!

I have this one in my shopping cart but haven't pulled the trigger yet. Any opinions?

I have a Viair 88p that gets the job done. It's an little slower than some other options but compact, reliable, and priced right for someone who isn't using it routinely. A 45% duty cycle is enough to get all four tires aired up from 20 to 35 PSI in about 20 minutes.

Okay so here is the part thats included

Its kinda pricey. Its a pretty beefy compressor and it has a replaceable fix-a-flat style sealant canister.

Now you can get a beefier, similarly sized compressor for less money, like this one but thats going to actually be more than you need. Ive seen a few complaints from that brand that if you are over ~80 psi they will pop the fuse in your car, rather than the one in the compressor (which can take a pretty hefty amperage.)

Cheaper still, something like what I was using before I bought my volt would be a small hand held affair This isnt the exact model I had but its similar, and a comparable price. This is going to be slow to inflate your tire, but the benefit is it takes up virtually no space at all.

This is actually the sort of thing I would recommend. Its medium sized, reasonably powerful but not a monster, and it has a built in flashlight (which is SO helpful.)

A decent compressor can be got from walmart for $20, but if you want to spend more there are a ton of good options of all shapes and sizes and at any price point you can imagine.

Last but not least, if you dont get the GM one, you should include a can of fix-a-flat in any car, whether you have a spare or not.

PS a good alternative to the GM one might be the fix-a-flat brand compressor which also has a canister, and is a good price.

If it were me, I'd buy a Viair 88P. The first review gives a comparison of all the new Viair models. I use mine nearly every weekend in the summer to air up my F250's tires from 12psi to 50psi when leaving the beach, and it can do all four in 15-20 minutes. Pretty good for a 12v inflator.

I had the Harbor Freight 150psi 12v inflator before that, which worked slowly...for about the first two trips. Took like 30 minutes to air up. Then it just lost pressure. Guessing that a seal blew out.

Before that I had an all-in-one jumper box. Didn't really like it because instead of a good jumper box, tire inflator, and flashlight, you get 3 crappy versions, all in one case! First the flashlight broke, then the inflator, then the plastic clamps on the jumper box cracked and broke. Only thing good was the 10Ah SLA battery, which I still jump cars with, using a quality set of jumper cables.

If you want to step up from an inflator, I'd recommend getting either the Harbor Freight 6 gallon oil-less compressor or a 3-gallon oil-lubricated compressor.

As for me, I use the Viair 95% of the time to air up. On longer trips, or when I know that we'll need more air, I'll bring my 3-gallon oil-lubed compressor. But those things are power-hungry...I have to rapidly flip the switch on and off a few times so that a Honda eu2000i has time to step on the gas.

One of the other guys has the Harbor Freight 6 gallon oil-less, and since it requires 10 amps instead of 15, an eu2000i can handle it with ease. Just I'm fairly confident that my oil-lubed compressor will last forever, while the teflon-coated piston in his oil-less one has a finite life before it no longer seals.

Another guy had the Harbor Freight 3-gallon oil-less, and I aired up my truck with the Viair 88P in less time, then started airing up his other tires. Sure it holds 3 gallons of air and it's so power-conservative that he can run it off of a 12v inverter, but I can air up one tire in the time that it takes to pressurize the tank. And when the tires are close to full, it's running constantly to keep the tank at near-max pressure.

He's right. A battery clamp model is not significantly less convenient or much more expensive than a cigarette lighter compressor and it will fill your tire 3-5 times faster. That outlet is just limited on the amps it can pull.


I can go from 20 to 40 PSI in about 4 minutes per tire with mine. I run 45 highway but those extra 5lbs take too long and the compressor is burning hot by the time I finish the 4th tire. I've seen people put 5-10lbs in a tire with cigarette socket models (and have tried as such myself) and decided that was enough to get to the nearest gas station and finish the job.

Onboard air of course does not make sense for most people, but for regular offroaders it does. Especially if you have air locking differentials than need it anyway. Another popular option is actually using a CO2 tank. You get that filled up beforehand and it works very fast with no power required. They're usually good for 3-4 complete fill-ups.

No explanation necessary, I totally get it! When I first started driving on the beach, as a teenager, getting stuck was the biggest fear one could have. And we always dabbled with getting stuck, because no one ever told us to air down your tires or any other little tidbits required for driving on sand. Obviously being in 4x4 HI will always make for an easier drive. However, 4x4 LOW could really start digging unnecessarily with all that torque. All those great features us Jeep owners love are for off-road trails, most of them will not be required for driving on sand.

All that being said, the absolute key for driving on sand is low tire pressure, allowing you to "float" on the sand. If your local outer beaches don't have air stations, you'll have to invest in a air pump or drive with the hazards to the closest gas station. I use a Viair 00088 88P Portable Air Compressor and love it - takes about 2 minutes a tire on my stock KL Trailhawk Destination A/Ts.

TLDR: Air down to 15psi for beach driving.