We found 10 Reddit comments about RJ45 Ethernet Cable Connector, F-to-F Type, Almond Color. Here are the top ones, ranked by their Reddit score. 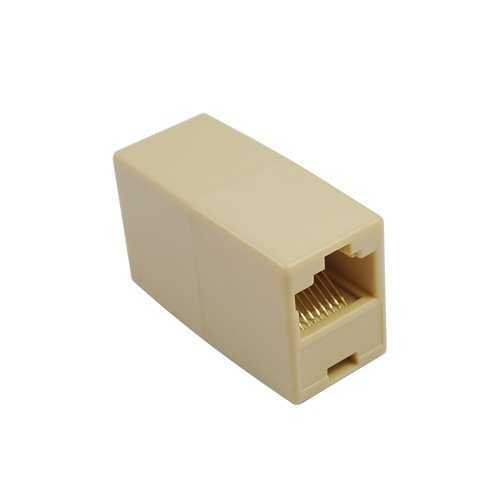 There is no industry standard for RS232 when using RJ-45 connectors. There are some documents that say they describe the pinout but they are for a specific unit, not a widespread standard.

Use an Ethernet cable as reschr suggests below. You can buy Ethernet jumpers to put on one end of a cable to turn it into an Ethernet extension cord. See http://www.amazon.com/RJ45-Ethernet-cable-connector-Almond/dp/B000BSLW8U

Ok I read your post. Wireless can work, but it still needs power or batteries. I'm not a fan of batteries. I like direct power usually Power Over Ethernet that comes from the NVR (DVR). Plug the NVR into a battery backup and you'll still record if someone cuts power at least for a bit depending on the size of the battery back up. Mine stays up for an hour and it's plugged into a $60 battery backup.

How do you spread them through the house. You have some options.

1: Drag the network cables down the hall to the camera and plug in. (ghetto and ugly).

2: Enjoy the agony of attic crawls and do line drops to each camera. Might not be as uncomfortable or difficult as my install but I'm in Florida and I did my install in 90+f weather. Oh and the contractor decided that having random vaulted ceiling vertical drops was a great idea. Think I lost 10lbs in sweat.

3: Do option 1, use some flat Ethernet cable similar to this: https://www.amazon.com/Cat-Ethernet-Cable-White-Connectors/dp/B00WD017GQ/ref=pd_lpo_vtph_147_bs_tr_t_2?_encoding=UTF8&amp;amp;psc=1&amp;amp;refRID=90PBMQPF3NV5GT02Y14E

There is even thinner stuff. You can pull carpet to hide it, paint over it, just run it along base boards, get conduit whatever you decide.

Keep in mind some boxed systems utilize proprietary connections at the camera that make it appear its not your normal Ethernet cable. For the most part rest assured you can cut most of these and if you know how to crimp an RJ45 cable you can extend the cable via a female to female connector although I'd strongly suggest just getting cable long enough here's what the connector looks liks: https://www.amazon.com/RJ45-Ethernet-cable-connector-Almond/dp/B000BSLW8U

I've done about 50 installs for clients and friends (I don't advertise this but after 15 years of working in the IT industry and generally being a geek they become friends, ask and I oblige).

You mentioned you don't have a whole lotta money to spend. I already commented once. Stay away from Zmodo. Garbage.

I despise wifi unless its an impossible situation to install. I work and have been in the IT field for 17 years or so. WiFi is an amazing technology but for cameras. I'll pass with the exception of areas where drilling holes in the ceiling/wall (Historic homes for example) just doesn't make sense. I prefer hard wire reliability. PITA sometimes to install but once the lines there you're good to go regardless if you decide to upgrade in the future. Plus since you have hard wires ran if you wanna drop a hard wire in another room. Cut cable, crimp RJ45 ends on each side. Through a network switch in between and now you had hardwire where you had slow or spotty wifi :)

I find it really silly your hoa doesn't allow cameras. My HOA loves that I have cameras. I've been able to help return a truck full of Christmas presents, blast someone stealing political signs, caught a domestic violence (yea..... I actually live in a wonderful neighborhood but shit happens).

Personally when it comes to protecting, preserving, and doing everything in my power to look after my assets I'd tell my HOA to kiss my ass. They'd probably never even notice the cameras if you use bullet cams outside. So small unless you have those rubberneck type neighbors.

Anywho. Yea read the Amazon description. Some of them you have to pull 4-8 screws and plop a hard drive in. Read the reviews of the systems in your budget. Not just the good stuff, a lot of them are there as positive because vendors will send you a free wifi camera, or some other crap to write it. I admit I did it for Zmodo. Funny thing.... The day the wifi "gift" came in I lost the ability to connect to my system from a computer. Only direct or via mobile app. They're "seeking a fix".... For 3 months....

Any modern DVR/NVR has motion detection and most have the ability to draw a box to blank and area on the video to say to the DVR/NVR (hey ignore motion here) from the camera that may have constant motion (A fan, a highway, TV, etc) to save on drive space and allow you to keep video longer.

Personally I just buy the biggest drive I can and don't mask anything.

It's crazy that I didn't notice my Movado watch missing after a party (yea I'm still a bit young so it happens) at my place for over a month. Wen't back to that night and a buddy actually who was also hmmmm a bit 2 sheets 2 the wind but was looking out for my interests put it on top of my fridge all the way in the back. I run 8 cameras at 720p 24/7 and have about 60 days of video retention on my 4TB hard drive. (They're cheap).

UncleGrga that replied before me is spot on with his comments. Mount your cams outside, the HOA won't notice and if they do say anything you can always move them. Frankly I'm really curious why they won't allow that. Nobody notices my cameras. Trust me..... I've watch my neighbors do the silliest things. (I work from home, my NVR has an HDMI output so while I'm on the computer I keep it up on my flat screen TV just cause. (Well.... I have attractive stay at home moms that like to jog. hehe... Don't judge I'm young and single).

Again I live in one of the quietest unknown tight-nit subdivisions in this county.

Seeing your neighbor pick their nose, pull out a big one (720p cams only see so far and clarity falls fast so it was HUGE) and proceed to wipe it on her hubby's driver side door handle had me rolling.

If you have anymore questions I'd be happy to reply. You can do this on a tight budget if you research.

I actually meant one of these

I'm not using pre-formed cables, I'll be crimping the end myself, but for joining the two cables I was evaluating options. Right now I see options:

Thanks for the pointers!

He means an RJ-45 coupler, I would assume. Sounds like it's a pair of pre-formed cables.

OP, if they're pre-formed cables, then you should stick with the coupler. The only real question at that point is can you get the premade cable's connectors through whatever hole you have going from outside to in, and then can you seal it afterwards to keep critters out. (You might be shocked at how small an opening a mouse can get through.)

I couldn't find any online either so what I ended up doing was buying a normal ethernet (RJ45-RJ45) coupler (like this one) and the short version of the wire from the marketplace. Then I used a long RJ45-RJ45 Ethernet cable I already had for the length and the marketplace cable to convert it to RJ45.

Just plug an RJ45 coupler into the other end and then you can plug your toner into it.

Sigh, your IT guy will hate me but I'm going to spare you some trouble.

Are you sure this is where it is bad/what is causing the problem. It is hard to tell from the picture exactly, so here is some general info.

The outer black layer is pretty much just for protection/shielding and could be replaced with electrical tape in a pinch (which it sounds like you have tried).

Inside you have 8 wires in 4 color pairs (a solid and a stripe). One or more of those wires may be damaged/disconnected.

I would look at them closely, peal back the black outer coating more if needed, and see if you can find any breaks in the 8 smaller wires. If you find one and absolutely don't want to buy anything to fix it right or run another cable, you may be able to strip off the outer coating on the individual wire to expose the copper wire inside.

If you don't see any obvious breaks or issues, check into other issues (like is it maybe the router, the XBox, the cable RJ-45 plugs (the ends), etc).

Anyway, good luck. If you really want to fix it right, you could get a not that great, but serviceable crimper set for under $15:

Cut the cable on either side fo the tear, use that to put an RJ45 jack on each end of the break, then use a coupler like this to join them back:

I know that isn't what you want to do, but it may be the best way if that is the true cause/location of your problem.

Honestly, it seems possible to build a logger that is about the same size and shape as that jack and stuff it into an unassuming enclosure. Since transaction data doesn't take up a lot of space, it could just sit there for a week or so, sniffing up card info.

If you have two matched antennas, neither will hold the other back.


If one antenna-set is better than the other, it'll help, but not very much. Think single digit performance gain since you shift the bottleneck a bit.


When it comes to every day usage, having awesome coverage and reliability trumps having faster peak performance.


Since you have a 4x4 adapter (which is uncommon), consider an the AC Pro.

Consider using a cheap switch instead of a coupler though. If the cables go too long you might run into issues. Having a switch in the middle basically "resets" the signal in a certain sense.