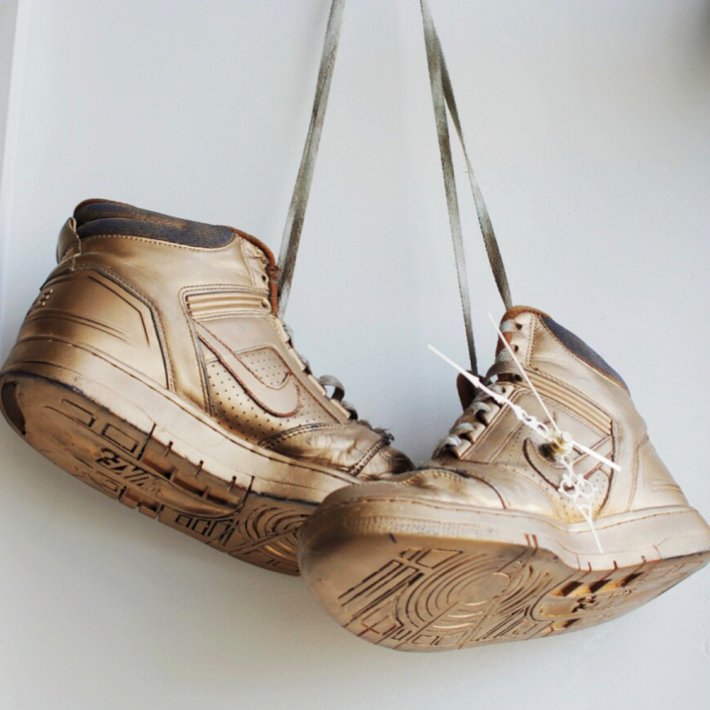 Crosby “ClockWork Cros” and the Maker Store bring you a limited edition Golden Midas Kicks Clock by none-other than ClockWork Cros. These clocks are editions of four, with only two clocks remaining after being shown during Armory Arts Week in New York and Art Basel Miami Beach.

ClockWork Cros is a Surrealist artist who was born and raised in the Lower East Side of New York. His clocks challenge ideas about disposability, longevity and reputation, while exploring the consumption of celebrity. He hand makes his clocks in his studio, taking iconic images of historical figures – actors, athletes, authors, poets, musicians – and manipulating them digitally.

He then hand cuts the images twice, before introducing the working clock movements into the eye of each image; creating functional working wall clocks that many have grown to know and love. ClockWork Cros’ clocks have been exhibited in galleries throughout the world and in art fairs such as Art Basel Miami Beach, Armory Arts Week in New York and Frieze New York.

“Crosby’s work…. frequently draws on the hip-hop and graffiti culture that was born in New York in the eighties.”
– Nicole Rudick, The Paris Review